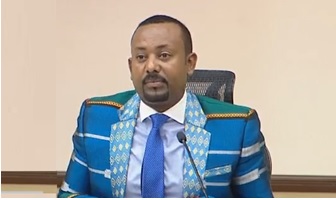 Ethiopia has registered a 6.1 percent economic growth during the past fiscal year that ended on July 8, 2020, despite the global pressure posed by the COVID-19 pandemic.

Premier Abiy on Monday addressed the special sitting of the House of Peoples’ Representatives and responded to questions raised by members of the parliament.

In his address, Abiy said the nation has registered a 6.1 percent economic growth, which is encouraging compared to the global economic prediction though it is dropped to 2.9 then the target.

However, Ethiopia’s economy remains resilient despite the challenging global pandemic, he added.

Ethiopia’s GDP has reached 107.4 billion USD and surpassed 1000 USD per capital, Abiy said and added that remarkable achievements were registered in the 2012 fiscal year of which joining the long-desired lower-middle-income countries was ensured.

According to him, agriculture, industry, and service sector are amongst the better-growing sectors registering 4.3, 9, and 5.3 percent growth respectively.

The government has been making sustained efforts to add value to its agricultural products and is planning to develop large Agro-industrial parks across the country, he mentioned.

Moreover, Abiy noted that mining is the top growing sector with 91 percent growth over the last budget year and the government has prioritized the sector as it has the potential to hugely contribute to the entire GDP and economic growth.

Stating that the number of citizens with saving accounts has raised from 37.8 million to 50.7 million observing a 31 percent increase, Abiy noted this will have a significant impact in allowing financial institutions to provide loans to investments.

Speaking of government support with regard to the emergence of the pandemic, the Premier pointed out that banks were provided with 1 trillion birrs to enhance their capacity of providing the loan.

Thus, Abiy stated that 70 percent of the 271 billion birrs, which is 189 billion, a loan given by the banks was provided to the private sector.

Transport, education, and tourism are some of the sectors that have been the hardest hit where they observed impacts of the pandemic and registered lower growth than what was expected, it was indicated.

The government allotted about 3.3 billion birrs in terms of a loan to support organizations within the tourism and tour operators, he added.

The rise in the national budget for the 2013 Ethiopian fiscal year will hugely support in sustaining the registered growth and further boost the economic activities to the desired prosperity, Premier Abiy underscored.