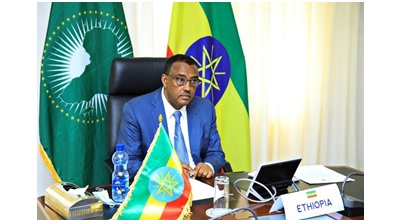 Ministers of Foreign as well as Water Affairs from the three countries participated in the virtual meeting focused on the operation and filling of the dam.

According to a statement issued by Ethiopia’s Ministry of Water, Irrigation and Energy, today’s event was convened by the Minister of International Relations and Cooperation of South Africa and Chairperson of the AU Executive Council.

The Ministers discussed the next course of action in resuming the negotiation and understanding has been reached on the need to continue the talks.

“Although the delegation of Sudan conditioned its participation on the alteration of the format of the negotiation, the Chairperson of the Executive Council concluded the meeting urging the Parties to produce a text that can be presented to the meeting of heads of states and governments,” it added.

PRESS RELEASES ON THE TRIPARTITE FOLLOW UP MEETING OF MINISTERS OF FOREIGN AFFAIRS...