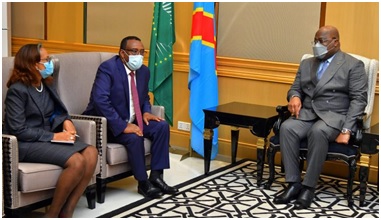 Ethiopia’s Deputy Prime Minister and Minister for Foreign Affairs, Demeke Mekonnen yesterday briefed President of DR Congo, Félix Tshisekedi about the operation in Tigray and the negotiation over the GERD.

He further conveyed the message and greetings of Prime Minister Abiy Ahmed to the President.

As far as the law enforcement operation in Tigray is concerned, Demeke reiterated how the rogue and intransigent TPLF clique have been undermining the sweeping reform that brought hope to Ethiopian citizens.

He said the TPLF junta has also been playing a destructive role by financing, organizing and deploying extremist groups in the country for the last two and a half year.

Testing the government’s patience to its limits, said Demeke, the TPLF group brutally attacked the Northern Command Force on November 04, 2020.

He said the operation in Tigray would end rapidly restoring the rule of law in the region and bringing the perpetrators of the heinous crime to justice.

President Félix Tshisekedi for his part underscored that the government’s law enforcement operation in Tigray is a domestic affair which does not call for any external intervention.

He said the government of Ethiopia has the obligation to protect the constitutional order and uphold the rule of law when extremist groups act unconstitutionally to meet their objectives.

In their discussion about the ongoing negotiation over the GERD, Demeke underlined Ethiopia’s desire to work together with the DR Congo in water and natural resource development and other fields.

Demeke noted that as the main sources of the Nile River, the two countries need to utilize the water resources to accelerate their economic development.

He also expressed his confidence that the Democratic Republic of the Congo would ratify the Cooperative Framework Agreement (CFA) over the Nile Basin water resources.

President Félix Tshisekedi expressed his hope that Ethiopia, Sudan and Egypt would reach a negotiated agreement regarding outstanding issues of the GERD negotiation.

The President also reaffirmed his decision to further consult on relevant bodies to ratify the CFA, according to the Ministry of Foreign Affairs.