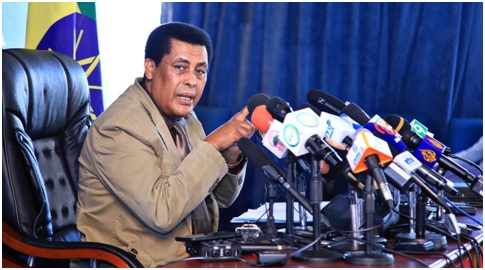 The Ethiopian Government has vowed to strengthen its ongoing efforts to peacefully resolve the border issue with Sudan.

Despite ease of tension along the border now, the government will reinforce its efforts to peacefully resolve the problem, said Ambassador Dina Mufti, Spokesperson of MFA.

In his bi-weekly press briefing today, Ambassador Dina said that Ethiopia has no interest to enter into war with Sudan in the border conflict masterminded by conflict profiteers.

However, “it is impossible to say that some Sudanese Government officials are not involved in the problem,” he said.

Commenting on latest developments in Tigray regional state, he said things are returning to normalcy and misguided narratives on the operation are slowly changing.

The media are slowly but surely understanding that the TPLF clique had disrupted electric and communication lines, demolished bridges, roads and airline runways, he said.

Owing to the economic diplomacy carried out by Ethiopian officials, investors from India, Turkey, the UAE, and China have shown interest to invest in Ethiopia, Ambassador Dina said.

According to him, some of the representatives of companies in these countries have paid a visit to the country and showed interest to invest in agriculture, construction, textile, edible oil production and mining.

Regarding citizen-centred diplomacy, the Spokesperson said Ethiopia had repatriated a total of 328 citizens from Saudi Arabia and Lebanon.