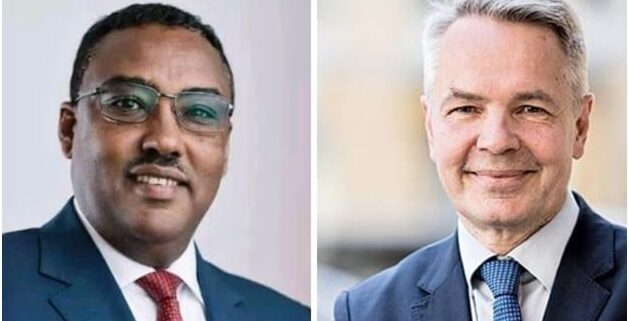 Their discussion focused on the recently completed law enforcement operation in Tigray, the latest developments in the region, and humanitarian assistance to those in need.

Demeke commended the active engagements of Finland in education and water resources projects in Ethiopia.

Regarding the latest developments in Tigray, Demeke said the government has continued to restore telecom and electric power services that were disrupted by the irresponsible actions of the criminals.

The federal government is also rebuilding infrastructure and working with the UN agencies to provide humanitarian assistance to affected people, he said.

Although the criminal clique looted Eritrean refugee centers in Tigray, he said, the refugees are now in safe hands with support from the Ethiopian government.

Ethiopia is ready to repatriate citizens from Sudan, he said, adding that the government will screen out some refugees who have participated in the Maikadra massacre.

Demeke also expressed hope that the European Union would understand the reality on the ground in Tigray.

The Union’s stand to put the federal government of Ethiopia on equal footing with the TPLF criminal clique is regrettable, he added.

The discussion between the two ministers also includes the current status of the AU-led GERD negotiation which is on the right track, plans on the post-COVID period, and distribution of vaccination to the virus.