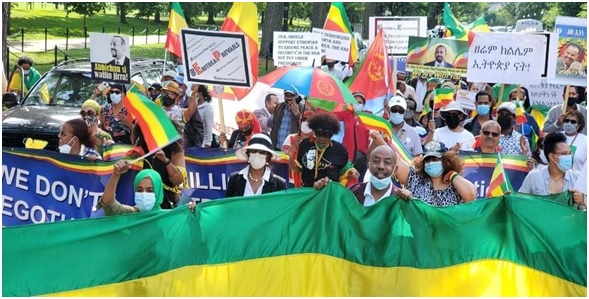 Ethiopians and people of Ethiopian origin living in Washington DC made a rally yesterday calling on some international organizations and countries to stop unduly pressuring the Ethiopian government.

Participants at the rally said Ethiopia has the right to maintain its territorial integrity, defend itself from aggressors, and dictations from third parties to do otherwise to a sovereign state should not be acceptable.

Referring to the State Department’s recent statement on Ethiopia, they said it was influenced by unsubstantiated TPLF claims and sidelined the historical relationships between the two countries.

They further said that the statement has undermined Ethiopia’s sovereignty and did not positively contribute to the peaceful coexistence of people in the country.

Regarding the GERD negotiations, they called on the United States and the international community to encourage Egypt to work for the common good of the tripartite.

They said they will put the necessary effort to ensure that their country and the government overcome current challenges and hold peaceful national elections.

They underscored that there should not be any negotiation with extremists and called on the people of Ethiopia to stand together to solve their problems through their own initiatives.