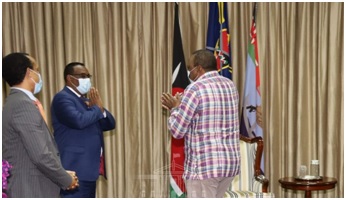 On the occasion Demeke also delivered a special message to President from Prime Minister Abiy Ahmed and briefed him on the political and security situation in Ethiopia.

The Deputy Prime Minister’s briefing mainly focused on the gains made from the socio-economic and political reforms carried out over the past two and a half years.

He said the destructive forces of TPLF have made various attempts to deter the ongoing reforms by sponsoring different extremist groups in various parts of the country.

Despite government’s patience and efforts to handle the situation carefully, the TPLF sponsored conflicts have claimed the lives of several Ethiopians and caused damages to properties, he said.

Moreover, the TPLF forces recently attacked the north command of the national defence forces in the northern part of the country and killed several military personnel and civilians, he said.

Demeke said the law enforcement operations launched in Tigray is an internal affair and aimed to bring to justice these destructive forces and contain the threat posed to the unity and sovereignty of the country.

Stating that Ethiopia and Kenya have for long served as anchor states for regional peace and stability, President Kenyatta has called on the Government of Ethiopia to wrap up soon the law enforcement operations in the country.

“I stand for the honor of our national Defense Forces” Tuesday, November...

Ethiopia Never Asks Any Country Including Uganda For Mediation With TPLF Junta:...