Blog - Latest News
You are here: Home / Uncategorized / Ethiopia Never Asks Any Country Including Uganda For Mediation With TPLF... 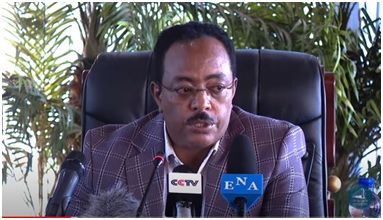 State of Emergency Spokesperson, Ambassador Redwan Hussien briefed the international media yesterday for second round on latest developments in Ethiopia.

In the second briefing session organized to make clear the international media on what is happening in Ethiopia, Ambassador Hussein said the TPLF Junta has admitted that it committed treason against the National Defence Force in Tigray.

He said that the government is taking action against the renegade group of TPLF in a view to ensure rule of law in the country.

The massacre of innocents carried out by the TPLF special force and military in Maykadra is a crime against humanity, said the spokesperson adding civilians including women and children heinously killed in the area.

He told the media that the TPLF Junta carried out rocket and missile attacks at Gondar, Bahir Dar and other place in Amhara Regional State, and killed innocents in Mai-Kadra who are not from Tigray to instigate revenge in other parts of the country and widen the problem it incited.

The motive was to provoke other Ethiopians to attack Tigrean people everywhere as retaliation, and this heinous motive has been thwarted, he said.

TPLF Junta ringleaders are trying to create hysteria among the Tigray people as if the national Derence Forces are attacking the region.

Ringleaders of the TPLF Junta do not care about the people they were leading, push peasants and teenagers to war as they teach their sons and daughters abroad, it is indicated.

People of Tigray will breathe the air of freedom like other Ethiopians once the Junta is brought to Justice, he said.

The TPLF Junta is trying to escalate the issue by attacking neighboring countries and internationalize the case and make is spiral, and are creating humanitarian crisis to get attention of the international community, he noted.

National Defence Forces keep on destroying the weaponries of the TPLF to contain their intention to escalate the issue, he stated.

Regarding some misleading reports from the international media about Uganda-led mediation between the federal government and TPLF, Ambassador Redwan said that Ethiopia has never asked any country to mediate as its position is clear from onset.

We never heard a question from Uganda about the matter, he said, adding that Ethiopia has never asked Uganda or any other country to mediate because our position was very much clear from the onset.

Ethiopia has sent a delegation to Uganda and the entire region, and the tour will covers around six countries, particularly IGAD member countries, he disclosed, adding “It has nothing with mediation”

The delegating was interested to deliver the message of the Prime Minister which augments buttresses and make it further clear that we don’t need mediation until we bring the ring leaders to court.

“Because any mediation would incentivize impunity and unruliness, so any partner who wishes the holding together of Ethiopia, and then the government has to be supported to make sure that the law of the land is upheld.”, he urged the international community.

To equate the government with any sub national entity would threaten the very existence of the country, he stressed.

“Any country and partner should put itself in our shoe.  Would any country in the world allow an entity in a district or a country who openly claims to have a rocket or missile and vow to attack its headquarter and dismantle the country and openly attack its defence forces?”, he stressed, adding “which country in the world be asked to sit down and negotiate with such sub national unduly group?”

“So if any country does not wish to do it if it happens on its soil, the same is true in Ethiopia for the government is taking action against the treacherous group from sub region in the country in a way to maintain law and order and territorial unity of the country.”, the State of Emergency spokesperson said.

The law enforcement operation would be a short-lived and law and order is imminent in the Northern part of the country and the whole nation as well, the spokesperson underlined.

We sent a delegation that would look out facts on the ground and then will come up with a plan as to how actually take care of the humanitarian crisis in the northern part of the country where law enforcement measures are underway.