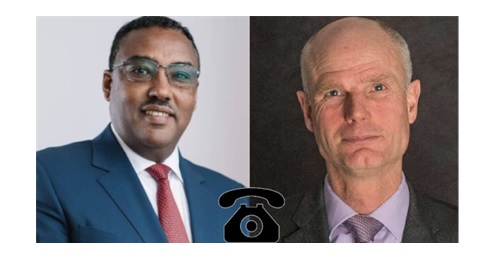 Deputy Prime Minister and Foreign Affairs Minister Demeke Mekonnen exchanged views with Foreign Minister of the Kingdom of the Netherlands Stef Blok via telephone conversation on current situation in Tigray.

Dekmeke briefed the Foreign Minister regarding the heinous crimes committed by the TPLF junta and the law enforcement measures that had been undertaken over the past three weeks to restore constitutional order in Tigray region.

He said the law enforcement operation has successfully been completed with Mekelle now fully liberated from the control of the junta and life has returned to normal with political dialogue in some places like Adwa has already been held.

The TPLF junta has destroyed infrastructure including airports said the Deputy Prime Minister and added that the task of reconstruction and rehabilitation has commenced with the aim to address the region’s economic and social development challenges.

He also informed the Foreign Minister that accessibility won’t be much of an issue now that Tigray region is fully liberated from the hands of the TPLF junta and the Government is working with international humanitarian agencies to respond in a swift and timely manner to those who are in need of humanitarian assistance.

Both Foreign Ministers have agreed to continue to work closely to enhance their bilateral relations by further strengthening the established cooperation, according to Foreign Affairs Ministry.

PM Says 113 Incidents of Communal Violence Occurred Over Last Two And Half Years...