Blog - Latest News
You are here: Home / Uncategorized / PM Says 113 Incidents of Communal Violence Occurred Over Last Two And Half... 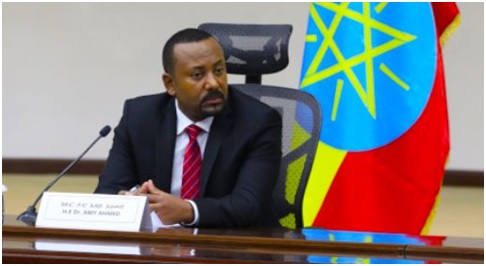 Prime Minister Abiy Ahmed has recounted the weeks and days before his premiership and the TPLF’s open surveillance and duress to create pressure upon those that were expected to be at the helm of the news administration in 2018.

Addressing the parliament, the Prime Minister said that 113 incidents of communal violence have occurred in various parts of Ethiopia over the last two and half years.Of that number, 37 and 23 incidents took place in Oromia and Amhara regional states and 7 in Gambella and other places respectively, he said.

Prior to the then EPRDF’s nomination of the next Prime Minister, TPLF are said to have been undertaking intrigue to put in place an individual that would succumb to their pressure and promote their interests.

What the new administration in 2018 aspired for was a change in Ethiopia’s political culture towards a more inclusive and unified approach. Yet our inclusive agenda was rebuffed by TPLF.

“The day I was sworn in as Prime Minister, the security sector controlled then by the TPLF clique refused the entrance of my own chosen security to the office and my residence.”, the primer recalled and said that he was told he can only use his security personne.

“Swift changes were being demanded by the people we serve while we were under the conditions of duress by TPLF’s well laid out espionage network. Yet we agreed we would take any risks counting on the Ethiopian people to stand for us.”, he noted.

“Alshabab was going to attack us. I told him to bring data to that effect and went to the region.”, the Premier noted.

His first trip in 2018 was to the Somali Region because of the dangers it was facing by then, and he were told he cannot go by the head of intelligence at the time on the false context.

“We took a firm decision to remove “mini governments” operating within the legitimate government by taking measures to guarantee institutional independence from the influence of a clique working for its own survival. This was done particularly in the security sector.”, he said.

“Our request for the release of political prisoner Andargachew Tsige was also met with a strong resistance by TPLF. They told me that it would dangerous to release him. This led to a conflict. I asked myself who is the Prime Minister now?”

Reforming the defense force was difficult in the initial stages considering domination by one group. Four star generals from Tigray constituted 60pct while the rest of 40pct were from the other parts of the country. The same was true with other army ranks down the command chain.

“Over the past two and half years there were 113 conflicts orchestrated throughout the country, expect in Tigray region. All these conflicts supported financially, through training, through media organized for this to give an impression the new administration is weak.” the Premier underlined.

In Oromia region alone 37 conflicts were orchestrated in the past two and half years, sowing the seeds of division along ethnic and religious lines. Yet TPLF claims to stand for the people of Oromia after leaving many lives in shambles through conflicts they initiated, according to the Prime Minister.

Conflict between Afar and Somali regions showed a departure from the traditional pattern indicating it was also orchestrated. Women were being targeted; fighting was at night with fighters faces covered. We ordered the army members to leave & after that it was quite.

“Why would we strike Mekelle? Mekelle is ours. It’s Ethiopia’s. Our ENDF operate with utmost discipline with care for civilians.”, Prime Minister Abiy stressed.

The Ethiopian Diaspora needs to be conscious of how illegal remittance channels have been benefiting the criminal TPLF clique to mete out violence against its own people.

“The impression that TPLF left when EPRDF decided to merge is a false narrative. TPLF itself endorsed the merger. TPLF itself had also voted for the decision to adopt the Algiers decision & forge peace with Eritrea. Then they go out in public & say they didn’t.”

Despite TPLF’s many orchestrated roadblocks, we managed many reforms: charity law, anti-terrorism law, media law, the electoral law, human rights commission reform, electoral board reform, amongst many others.

Ethiopia’s relations in the Horn also shifted positively and contributed for the success of the law enforcement measures against the TPLF Junta.

National armaments have purposely been kept and amassed in Tigray region for years by the TPLF criminal clique, and almost all the rockets were stationed in the region, the Prime Minister added.

The law enforcement measure in Mekele City has been conducted successfully without causing any harm to the innocent people, the Prime Minister added.