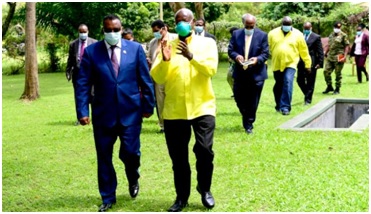 President of the Republic of Uganda Yoweri Kaguta Museveni has announced in facebook that he had discussions with the Ethiopian Deputy Prime Minister and Foreign Affairs Minister, Demeke Mekonnen and his delegation at Gulu State Lodge.

“Being one of the oldest countries that was not colonised in Africa, Ethiopia is the pride of the continent.”, President Yoweri Museveni added.