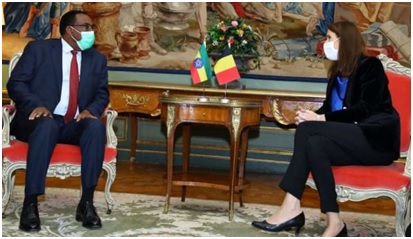 On the occasion, Demeke explained to Madam Wilems the significance of the law enforcement operation in the Tigray Region to bring to justice the TPLF Junta that openly attacked the Northern Command of the Ethiopian National Defense Forces on November 4, 2020.

Demeke talked about the two and half year long efforts made by the government to encourage the TPLF leadership to be a constructive force to the reform and democratization process.

He highlighted the unlawful deeds committed by TPLF Junta and the further destabilization acts it took in many parts of the country by aligning with extremist elements.

He emphasized, in this light, the primary responsibility of the Federal Democratic Republic of Ethiopia to maintain the rule of law, protecting, and defending the Constitution and ensuring peace and security of its citizens.

Deputy Prime Minister and Minister of Foreign Affairs of Belgium, Sophie Wilmès Wilems on her part has welcomed the delegation and congratulated Demeke for assuming his new position.

She then expressed her government’s concern about the humanitarian situation and its possible spillover impact in the broader region adding that that her government is keenly following AU-led efforts and dialogue needs to happen.

Demeke also explained the collaboration that is being made with international humanitarian organizations to operationalize basic assistance to the society in the areas where the operation is being conducted.

He told his counterpart that the government is delivering basic services to the people in liberated areas who are in need of assistance.

He also emphasized for the understanding of the international community about the efforts underway to keep law and order in the country and in this regard called for the support of the Belgian government to play a fair and balanced role in its current position of non-permanent member of the UNSC.

Ethiopia and Belgium have a long history of diplomatic relations since 1906, when the Government of Belgium first opened its embassy in Addis Ababa, making it the 5th country to do so.

PM Announces Commencement of Final Phase Of Rule Of Law Operations In Tigray...