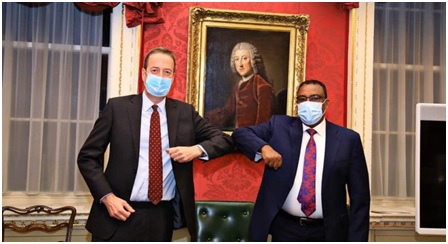 Demeke on the occasion said the TPLF clique caused massive damage on the people and the government of Ethiopia, while the country is undergoing promising reforms.

He also stressed the need to give protection to civilians and allow access to humanitarian relief for people in need.

Demeke said Ethiopia will wrap up the operation shortly by giving utmost protection for civilians and facilitating access to humanitarian assistance for people in need.

Demeke also met with Dominic Raab, Secretary of State for Foreign, Commonwealth and Development Affairs of UK for a briefing about the situation in Tigray regional state.

He gave reassurance to Rabb that the Government together with the international agencies is working tirelessly to address the humanitarian situations with more humanitarian corridors opening up to reach those in need of humanitarian assistance.

Efforts are also under way to support those refugees who fled to Sudan to return and settle peacefully in their home country said Demeke adding that accessibility won’t be much of an issue now that more areas are liberated from the hands of the TPLF junta.