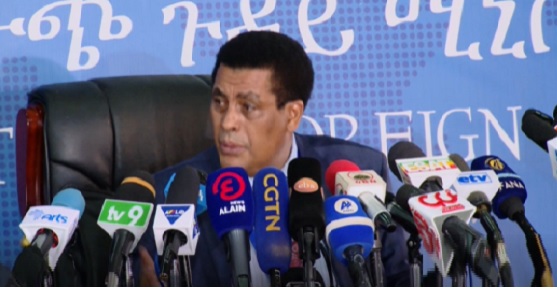 The trilateral meeting on the Grand Ethiopian Renaissance Dam will resume on Sunday January 10, 2021 when experts from the three countries are expected to present identified common positions and differences, according to Ministry of Foreign Affairs.

The negotiations on GERD which resumed this week are chaired by South Africa International Cooperation Minister.

Briefing the media today, Foreign Affairs Spokesperson Dina Mufti said ministers of water, and foreign affairs were part of the delegations who discussed the way forward based on the modalities presented by the experts.

“Though the modalities were accepted with conditions by our side and the Sudanese side with certain recommendations. But the Egyptian side has entirely rejected the modalities,” the spokesperson revealed.

Finally, the ministers decided that the experts of the respective three countries continue identifying and sorting out differences and common positions that have been registered so far and to come up with the outcomes, he elaborated.

According to the spokesperson, the experts will present common positions by the three parties and the differences to the meeting which will take place on Sunday.

Asked about the Ethio-Sudan border situation, Dina confirmed that Ethiopia has still a firm position that the situation will be resolved in a peaceful manner through dialogue and diplomatic means.

He noted that “Ethiopia always considers the big picture of the two countries’ relation. That is why its doors are still open for dialogue and negotiations to settle the situation in a sustainable manner.”