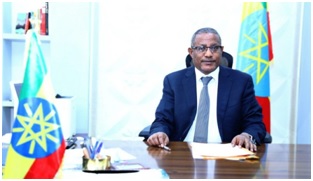 A virtual meeting aimed at forging a joint front and shared consensus on the Grand Ethiopian Renaissance Dam (GERD) issue among all Ethiopian missions and citizens residing in the Nile River riparian states kicked off today.

Gedu Andargachew, minister of Foreign Affairs of Ethiopia, delivered opening remarks urging Ethiopians to continue contributing financial and technical supports to the construction of the dam.

The minister said since the Nile river basin holds two-thirds of Ethiopia’s water resources, utilizing it is a matter of sovereignty and an essential requirement for the development of the country.

Upon completion, the flagship project will enable millions of Ethiopians to get access to electricity, engage in newly created jobs and uplift themselves out of poverty, he said.

The building of the dam corrects historical imbalances and sets the relationship among the Nile River riparian states on the right track, said Gedu.

According to him, the building of the GERD initiated the Cooperative Framework Agreement (CFA) by recognizing the right of all the Nile River riparian states, including Uganda, Rwanda, Tanzania, Burundi, the Democratic Republic of the Congo, Kenya, and South Sudan to utilize the water resource too.

Engineer Gedion Asfaw, Dr.Yakob Arsano, and Zerihun Abebe have also participated in the meeting, according to the Ministry of Foreign Affairs.