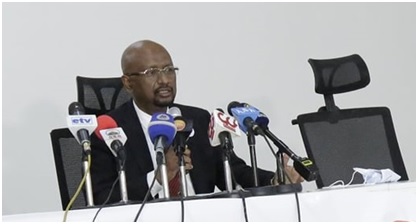 Ethiopia is keenly working on completing the construction of the Grand Ethiopian Renaissance Dam (GERD) project by 2023 and considering the dam as water security threat is unfounded and unscientific, said Minister of Water, Irrigation and Energy .

Minister Engineer Seleshi Bekele (Ph.D) further said that the construction of GERD has reached 78.3 percent and it is expected to be completed up to 82 percent until the upcoming rainy season.

Engineer Seleshi told a local media that the overall construction of the dam has seen rapid development following the swift measures taken by the reformist administration to ensure professionalism. The administrative adjustments have solved the most critical problems related to decision making and follow-up system, he added.

He said that the new administration and the board jointly with the Ministry and Ethiopian Electric Power (EEP) have solved the factors that led for the delay of the construction before the reform in 2018. “Solving the major problems, undertaking continuous follow-up, assessment and evaluation has enabled the country to return the process of the construction of the massive power plant on the right truck.”

He ,therefore, said that the GERD would be gone fully operational by 2023 as per the reschedule.

Following the successful completion of the first round filling, second filling is going to be held during the coming rainy season-on July 2021, Seleshi indicated.

He reiterated that GERD board members and managers and EEP officials meet often to discuss every development and report the assessment to the Ministry. Every development is also reported to the Prime Minister. With such strict follow-up, inputs and necessary materials are supplying properly and the contractors are also working hand-in-hand with the government , he said.

The minister stated that GERD is the most secure and safe dam of all projects that have built on the Nile River. For him, GERD is constructing with modern and sound technology, latest materials and precision. In addition, GERD is a water bank for the downstream countries, he stated.

The problem with the downstream countries is neither a technical issue nor fear of water shortage but misconception of considering Ethiopia’s development as a threat. However, GERD is the most helpful project for them by any criteria, he added.

According to the minister, the development of Ethiopia is a blessing for its neighbors to facilitate regional and bilateral economic transactions and common development. Ethiopia is always ready to reach fair agreement as usual, but never compromise its national interests by external pressure.