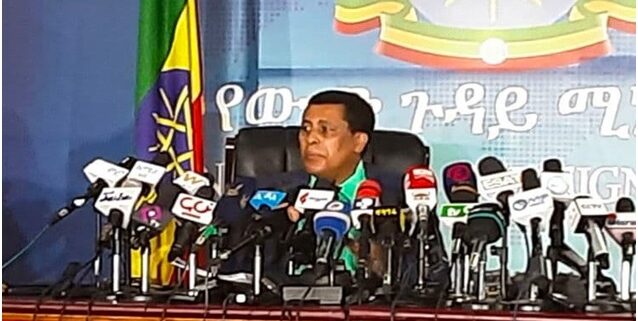 During the weekly press briefing session, Spokesperson of Ministry of Foreign Affairs, Ambassador Dina Mufti reiterated the commitment of the federal government to maintain relief operation in Tigray region.

Ambassador Dina said the recent permission granted to humanitarian flight is part of the efforts to address the need the need in the area.

Humanitarian cargos must land at Addis Ababa and undergo close inspection and checkup before they enter Tigray, the spokesperson stressed.

Saying that the unilateral ceasefire declared by the government is intended to protect peace and security to the people in the region, create peaceful farming atmosphere for the farmers and continue peaceful negotiation with international stakeholders, the Spokesperson said the TPLF group has not yet shown any interest to adhere to respect secession of hostility.

The terrorist TPLF has continued disseminating disinformation, fake news and misinformation as false propaganda to mislead the international community.

Regarding Thursday’s United Nations Security Council (UNSC) meeting, the Spokesperson said almost all member countries have urged Egypt and Sudan to come back to the AU led negotiation on GERD.

The Water, Irrigation and Energy Minister, Dr. Seleshi Bekele urged the UNSC to encourage the two countries stick to the AU led process, he added.

Ethiopians and Ethiopian nationals living in all corners of the world specially those residing in the US have plaid a crucial role in clarifying the world about Ethiopia’s fair and reasonable position on the Nile River and fighting foreign meddling in to Ethiopia’s internal affairs.

Financial Support of the Diaspora community to construction of GERD has been increasing more than before, he added.

Concerning the efforts to return Ethiopian compatriots from detention centers of Saudi Arabia, the Spokesperson explained the nation has repatriated 21,182 citizens with 99 charter flights.

Some 40 Trucks Loaded with Humanitarian Aid Leave for Tigray (July 9, 2021)