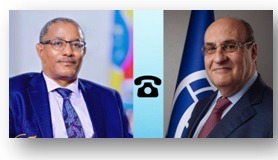 In their conversation, Manuel said IOM is committed to strengthen its relationship with Ethiopian pledging continued support to the country.

The Foreign Minister, to his part thanked the IOM for its support to Ethiopians returning from the Middle East and expressed his hope that the support would continue.

He urged the IOM to reconsider its decision to relocate its liaison office at IGAD from Addis Ababa to a neighboring country.

Since most IOM stakeholders have offices in Ethiopia, it would be suitable for the overall operation if IOM maintains its liaison office in Ethiopia, the minister said.

Mr. António affirmed that IOM would reconsider its decision to relocate its liaison office at IGAD to a neighboring country.

A Kenyan Association in Washington DC Contributes $5,000 for GERD (September...