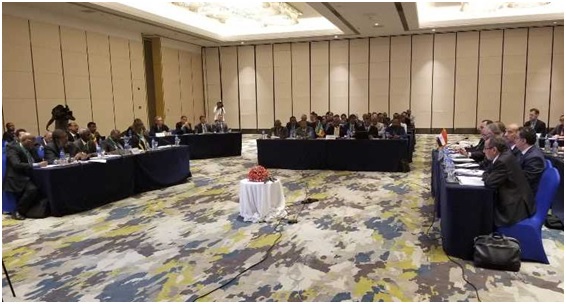 The tripartite meeting between Ethiopia, Sudan and Egypt kicked off in the Ethiopian capital Addis Ababa this morning.

The meeting, which will deliberate on the filling and operation of the Grand Ethiopian Renaissance Dam (GERD), is the continuation of the Khartoum meeting held last month.

In his opening remarks, Dr. Sileshi Bekele, Minister of Water, Irrigation and Energy of Ethiopia, reiterated that the use of Nile is critical to eradicate poverty hence a matter of survival for Ethiopia.

He expressed his hope that the meeting would conduct thorough discussion on the pending technical issues of the filling and operation of the GERD on the basis of the cardinal principle of equitable and reasonable use and causing no significant harm.

He further noted that the discussion will be conducted on the spirit of cooperation and goodwill to bring to conclude the process and bring good news to the people of the three countries.

The water affairs ministers of Egypt and the Sudan on their part expressed their hope that the discussion will be held in a cooperative manner and reach a common consensus.

The representatives of government of the United States and the World Bank are attending the meeting as observers.

In the Addis Ababa meeting, the three countries are expected to reach agreement on issues left unagreed.

The three countries will also meet in Washington on January 15, 2020 to finalize their agreement.

If an agreement is not reached by January 15, they will invoke article 10 of the 2015 Declaration of Principles.

Article 10 states that “The three countries commit to settle any dispute resulting from the interpretation or application of the declaration of principles through talks or negotiations based on the good will principle.

“If the parties involved do not succeed in solving the dispute through talks or negotiations, they can ask for mediation or refer the matter to their heads of states or prime ministers.”