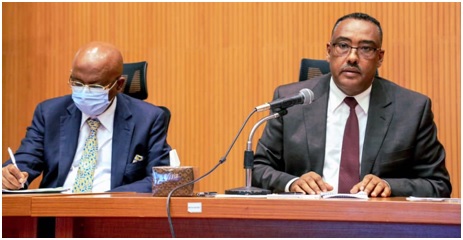 In the briefing, the two Ministers highlighted the issues discussed at the Kinshasa meeting and Ethiopia`s perspectives on the matter.

Ethiopia strongly believes that the AU led trilateral negotiation is the only viable way to reach a win-win outcome.

The Ministers stressed that cooperation and the spirit of African brotherhood are the best option for the management and utilization of the waters of the Nile.

Therefore, the Minister emphasized that such politization is not acceptable and encouraged the diplomats not to fall into these traps.

The Minsters underlined that in line with the Communique issued at the conclusion of the meeting of the African Union Bureau of the Assembly in July 2020, the most practical and workable way for a successful negotiation is first to agree on the first filling and related operations and then to proceed to a comprehensive agreement on the utilization of the waters of the Nile.

The Minsters informed the Ambassadors that in order to facilitate the exchange of data regarding the upcoming second year filling of the GERD that will commence in July 2021, Ethiopia in good faith has taken the initiative and formally communicated through the Minister of Water, Irrigation and Energy to his counterparts in Sudan and Egypt.

In addition to the trilateral negotiations on the GERD, the Ambassadors were briefed about the current situation along the Ethiopia-Sudan boundary and Ethiopia`s firm commitment to resolve the matter through a peaceful means based on the bilateral agreements and existing boundary mechanisms.

The Ambassadors on their part expressed their profound thanks for the briefing and emphasized the importance of reaching a win-win outcome on the GERD through the AU led negotiation based on the principle of “African solutions to Africa`s problems.”