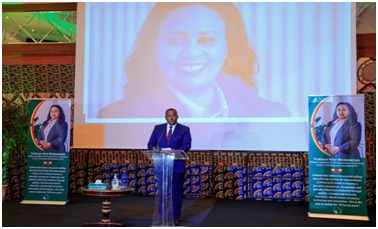 The Ministry of Foreign Affairs of Ethiopia held on Tuesday (February 02) a Promotional campaign supporting Professor Hirut Woldemariam who is running to hold the post of the AU Commissioner for Education, Science, Technology and Innovation.

The event was held at Sheraton Addis in the presence of the Deputy Prime Minister and Minister of Foreign Affairs of Ethiopia, H.E. Demeke Mekonnen.

Mr. Demeke called on the government and other pertinent bodies to support Professor Hirut Woldemariam honoring her outstanding professional caliber and ethical behavior that would make her a perfect candidate to run for the post of African Union Commissioner for ESTI.

State Ministers H.E. Ambassador Birtukan Ayano and H.E. Mrs. Tsion Teklu, African Ambassadors and heads of international organizations based in Addis Ababa and other invited guests were also in attendance.

On the occasion, professor Hirut expounded on her plans to carry out if elected.

She also shared a wide range of her vision with the audience if her bid to the position in the AU would turn out to be successful.

Speaking at the occasion, the candidate’s friends and former colleagues presented their testimonials lauding her level of education and extensive experience she has acquired holding high-level public and private responsibilities that would make her well-suited to run the office.

PM Urges Diaspora Community To Fight Against Spread Of False Information About...