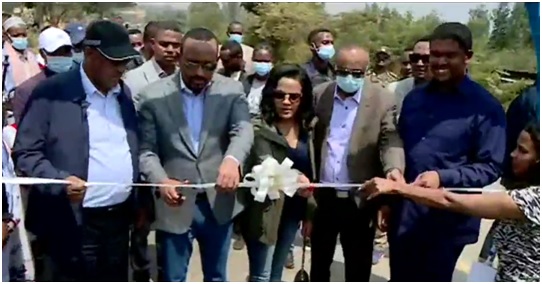 The road will be built with 1.6 billion birr allocated by the Government of Ethiopia. The contract was awarded to the China Railway Seventh Group Co Ltd.

In his remark at the event, the Prime Minister said Qellem Wellega remains one of the high potential growth corridors in the country.

He said due to lack of infrastructure, the area remained neglected and didn’t benefit from development gains.

Development projects being built in the area aim to connect Wollega zone with other parts of Ethiopia and neighboring countries, the Prime Minister said.

Once completed, the road will also fulfill the mobility and market access needs of the surrounding communities, he added.

The Prime Minister also called on the residents to contribute their share in maintaining peace and security so as to advance development in the area.

Demeke Mekonnen for his part said the government is committed to work for the unity of the people and to ensure benefit of the residents from development gains.

The time is now for change and to build national unity, said Deputy Prime Minister and Minister for Foreign Affairs.

Food and Non Food Items Being Distributed To 92 Centers In Tigray (February...