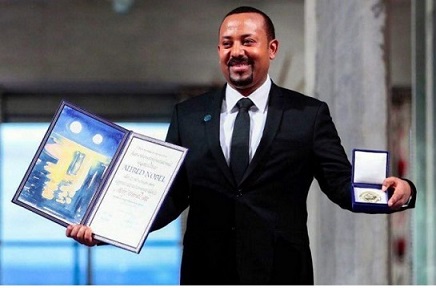 In his speech at the 2019 Nobel Peace Prize award ceremony this afternoon, the prime minister said peace must prevail in the hearts and minds of individuals, nations, and countries.

He shared his experience to the dignitaries of being a soldier during the Ethio-Eritrea border war which took the lives of about hundred thousand and wiped out his entire unit in an artillery attack on the war front.

“Twenty years ago, I was a radio operator attached to an Ethiopian army unit in the border town of Badme,” Abiy recollected, adding that “the town was the flashpoint of the war between the two countries. I briefly left the foxhole in the hopes of getting a good antenna reception. It took only but a few minutes. Yet, upon my return, I was horrified to discover that my entire unit had been wiped out in an artillery attack.”

The war survivor noted, “I accept this award on behalf of Ethiopians and Eritreans, especially those who made the ultimate sacrifice in the cause of peace.”

“Likewise, I accept this award on behalf of my partner and comrade-in-peace, President Isaias Afeworki, whose goodwill, trust, and commitment was vital in ending the two-decade deadlock between our countries,” the PM further pointed out.

Ethiopia and Eritrea have restored diplomatic relations, airline and telecom connectivity since last year. They are now proceeding to building new infrastructure and projects for common development.

Nobel Committee Chairperson, Berit Reiss-Andersen said on the occasion Prime Minister Abiy has exerted much efforts for peace and reconciliation to strengthen relations between Eritrea and Ethiopia.

She stated that “the award bestowed upon you today rests on three major achievements. First, your crucial role in creating peace between Eritrea and Ethiopia. Second, your efforts to build democracy in Ethiopia by strengthening civil liberties and developing institutions. And third, but not least, the award is given to you for your contribution to peace and reconciliation processes in East and North East Africa.”

The chairperson added that the premier represents a “new generation of African leaders who realize that conflict must be resolved by peaceful means.”

The Nobel Committee awarded the prize for Abiy for his efforts to achieve peace and international cooperation, particularly for his decisive initiative to resolve the border conflict with neighboring Eritrea last year, three months after he came to power in April 2018.

The PM is the 100th winner and was selected from 223 private and 78 organization nominees.