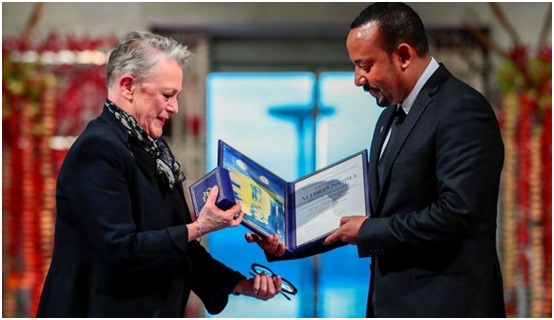 Berit Reiss-Andersen, Chairperson of the Norwegian Nobel Committee, said the award is in recognition of his crucial role in creating peace between Eritrea and Ethiopia.

“You seized the initiative and were the main architect behind the peace negotiations that were successfully conducted with Eritrea,” she said.

According to the Chairperson, the Prime Minister Dr Abiy was also awarded for his efforts to build democracy in Ethiopia and contribution to peace and reconciliation processes in East and North East Africa.

“We are awarding the Peace Prize to you as an individual because you have personally made an extraordinary difference across several arenas. It is the totality of your efforts that convinced us that it is you, Mr. Prime Minister, who have made the most significant contribution to peace in the past year, ” she said.

In his Nobel lecture, Prime Minister Dr Abiy thanked the Norwegian Nobel Committee “for recognizing and encouraging my contribution to a peaceful resolution of the border dispute between Ethiopia and Eritrea.”

“War is the epitome of hell for all involved,” he said. “During the war between Ethiopia and Eritrea, an estimated one hundred thousand soldiers and civilians lost their lives.”

“We resolved to turn our “swords into plowshares and our spears into pruning hooks” for the progress and prosperity of our people,” he noted.

As a result of the peace deal, families separated for over two decades are now united, diplomatic relations are fully restored, air and telecommunication services have been re-established, he said.

“And our focus has now shifted to developing joint infrastructure projects that will be a critical lever in our economic ambitions,” he noted.

Over the past few months, Ethiopia has made historic investments in peace, he said, citing the release of all political prisoners and the closing of notorious detention facilities where torture and vile human rights abuses took place, as examples.

He further said “Today, Ethiopia is highly regarded for press freedom. It is no more a ‘jailor of journalists’. Opposition leaders of all political stripes are free to engage in peaceful political activity.”

“We are creating an Ethiopia that is second to none in its guarantee of freedoms of expression.”

He further said the country has laid the groundwork for genuine multiparty democracy, and “we will soon hold a free and fair election.”

The Prime Minister called upon all “my fellow Ethiopians to join hands and help build a country that offers equal justice, equal rights, and equal opportunities for all its citizens.”

He also urged them to avoid the path of extremism and division, powered by politics of exclusion.

In his lecture, the Prime Minister also expressed his concern over the expanding military presence of global military superpowers and move by terrorists to establish a foothold in the Horn of Africa region.

“We do not want the Horn to be a battleground for superpowers nor a hideout for the merchants of terror and brokers of despair and misery,” he said.

Joint Statement of Egypt, Ethiopia, Sudan, the United States, and the World...