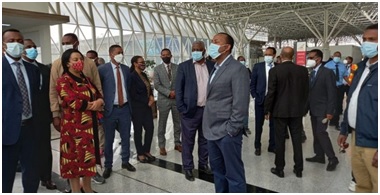 Senior government officials also joined the Prime Minister in visiting the terminal, which is nearing completion.

“Pleased to witness with the Council of Ministers the transformation taking place within Bole International Airport by the Ethiopian Airlines Group,” the Prime Minister tweeted after the visit.

“A modern aviation infrastructure has taken shape featuring a new terminal, VIP terminal section, business lounge and other facilities with an overall focus on biosafety and biosecurity.”

The terminal is part of the expansion project of the Ethiopian Airlines group. Construction of the project was launched four years ago.