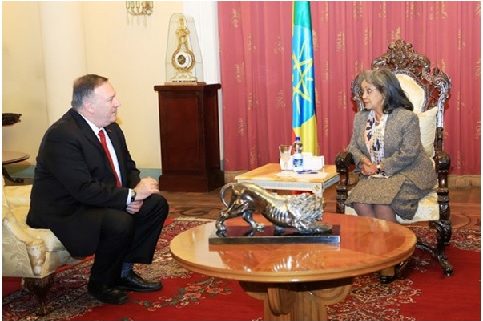 State Minister of Foreign Affairs, Ambassador Redwan Hussien, who attended the meeting told journalists that the President and Pompeo discussed bilateral relations between the two countries.

During the discussion, Pompeo assured the President of the United States’ continued support for the ongoing reforms in Ethiopia.

He further said that the United States will encourage and provide support for its investors to invest and do business in Ethiopia.

The Secretary of State also commended Ethiopia’s efforts to maintain peace in the Horn of Africa region and pledged that the U.S. would continue to assist these efforts.