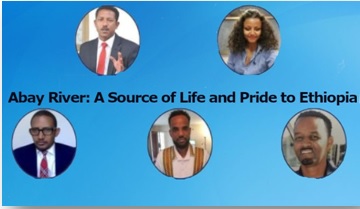 Experts who participated in the national consultation held under the “Abay River: a source of life and pride to Ethiopia” stress importance of the River Abay in changing narratives of Ethiopia.

Expressing his views on the word ‘pride’, Dr. Mohamud Girma stressed utilizing the Abay River will make Ethiopians complete, correct their self-image and help them make peace and strengthen harmony with themselves.

A Hydrologist and Advocate and Climate Advocate, Mekdelawit Messay, said the Abay River basin covers 2/3 of the irrigation and hydropower potential of the country and almost 50 million Ethiopians are dependent on the river for their livelihoods which made utilizing the river a matter of existence rather than choice.

A historian from Addis Ababa University, Abebaw Ayalew, through his paper revealed how the River Abay is inextricably linked with historical and religious factors affecting the relationship between Ethiopia and Egypt.

Deputy Director and Co-Founder of the East African Policy Research Institute, Dr. Birhanu M Lenjiso Abau said the Abay River should not be taken as simply as a source of water to Ethiopians but as a link to the country’s history of nation-building.

Mahemud Eshetu, a Ph.D. candidate in Law, elaborated on how Ethiopia should understand the 1902 agreement between Ethiopia and Egypt, the 1929 and 1959 colonial-era agreements over the Nile River and their possible effect on the ongoing GERD negotiations to reverse rhetoric over the issue.

Over 180 people have participated in the meeting where a number of questions were forwarded by the participants and further elaborated by the minister and the presenters of research papers.