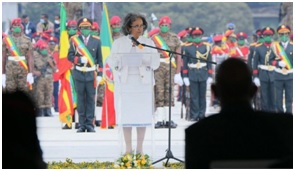 Wishing all Ethiopians a happy New Year, the President said the Sheger park would help better elevate the image and status of Addis Ababa.

Besides building image of the country and the city, parks built in Addis Ababa could be a testimony to what we can do if we work together, she said.

“If our efforts of beautifying our nation go hand in hand with other development efforts, we can change the image of the country within a short period of time,” the President said.

The Sheger has created jobs for more people, she said, adding Addis Ababa city administration and its dwellers need to take lesson from the park to jointly develop other smaller parks.

It shows Ethiopia’s civilization, many different cultures and unity, he said, adding it is a project which affirms the long-standing friendship between Ethiopia and China.

During the event, the Prime Minister gave certificates of recognition to Chinese government and other individuals who contributed for the construction of the park.

During the inauguration, parades were held by various professionals and service providers.

Ethiopian security forces also performed military demonstrations on air and the ground. The inauguration culminated with a flag ceremony.