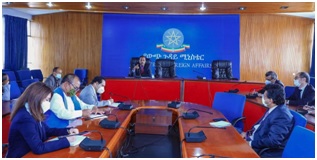 H.E. State Minister Redwan Hussien has updated today (April 29) Ambassadors of Asian countries in Ethiopia on the current situations in Tigray, the GERD negotiations, the Ethiopia-Sudan border dispute, and the 6th national election.

Although a lot of progress has been registered, particularly with regards to the delivery of humanitarian aid, some challenges remain to be dealt with to ensure lasting peace in Tigray, he said.

All of Tigray can be fully accessed now, he said, though a military escort could be required to deliver humanitarian aid in some of the areas.

With the redeployment of regional police forces and the establishment of community policing, the security of the region will be much improved, he said adding preparations for inclusive dialogue are underway to fully return the region into normalcy.

Considering the need to employ the approaching rainy seasons for farming, the government is providing farmers with seeds and fertilizers and facilitating the process to return internally displaced people to their homes.

He also spoke about the modalities that the government has prepared to respond to requests for visa extension and access to communication facilities for aid workers operating in the region.

Ambassador Redwan also said the government is urging the UN and EHRC to expedite the implementation of their agreement to jointly investigate alleged human rights violations in the region to put perpetrators into account.

Securing the region from outlaws and criminals and rebuilding destroyed infrastructure are the main tasks that the government is preoccupied with, he said.

On the GERD negotiations, Ambassador Redwan walked the diplomats through the major reasons that stalled the talks which are attributable to the irrational claims of Egypt and the self-defeating moves of Sudan.

He said the international community should understand that all of the concerns of Sudan have been adequately addressed while Egypt has continued to project its irrational claims of protecting the colonial-era treaties by window-dressing the claim through various names and demands.

In this regard, he said Ethiopia hopes the AU-led process will lead to a win-win solution that takes into account the country’s refusal to sign an agreement that forecloses the rights of its future generations for development.

The State Minister also talked about the Ethiopia-Sudan border dispute underscoring the belligerent attitude of Sudan that threatened to reverse all the positive achievements achieved following the signing of the 1972 Exchange of notes between the two countries.

Speaking about the upcoming general elections, he said the government has shown its commitment to making it fair and free which can be witnessed by the appointment of a former opposition figure as head of the NEBE who has ensured the organizations’ institutional independence.

The briefing ended following further discussions based on questions forwarded by the diplomats.

Leadership Can Only Be Attained Through Elections-PM Abiy Ahmed (April 29, ...