Blog - Latest News
You are here: Home / Uncategorized / The EU expresses its readiness to support Ethiopia in its continued reform... 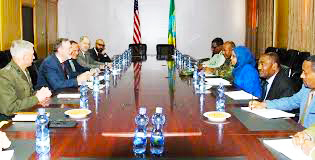 State Minister for Foreign Affairs, Mrs. Hirut Zemene, welcomed H.E. Christos Stylianides, Humanitarian aid and Crisis Management commission Commissioner of EU ealier today. (December 18).
H.E. Christos Stylianides appreciated the commitment of the government of Ethiopia to undertake a myriad of reform steps including multi-party democracy, respect for human rights, and the rule of law and gender equality recently. He said the European Union praises the changes, the political and economic reforms in Ethiopia and vows to assist government’s ambitious agenda towards a more democratic and a positive example to the region and beyond. State Minister Hirut thanked the EU for the continued support and commitment to scale up the relationship to a heightened level. She pointed out the strategic engagement with the European Union which includes cooperation in regional peace and security, migration; social and economic development; investment and trade; governance and human rights has depicted EU’s strong commitment to support Ethiopia’s democratic and economic reforms. State Minister Hirut noted the sweeping political and economic reforms in Ethiopia sets itself as a model for the Horn of Africa to become a stable, integrated and peace embracing region. In this regard, Ethiopia welcomes EU’s readiness to support the country in its continued work to ensure deepened EU-Ethiopia cooperation on the strategic engagements, she added. H.E. Christos Stylianides underpinned that the EU stands by Ethiopia to address its key challenges and encourages steps taken toward a greater degree of gender equality, inclusiveness and democratization. The EU-Ethiopia strategic engagement document was signed in June 2016.

President Sahle-Work: Digital Transformation is a Pathway to Prosperity for...