Blog - Latest News
You are here: Home / Uncategorized / The Nile Riparian Countries say the AU-led Process on the GERD negotiations... 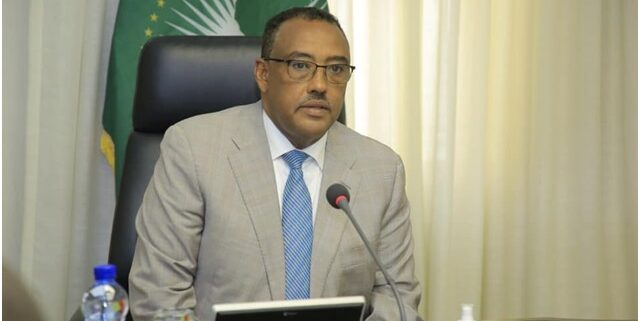 H.E. Demeke Mekonnen, Deputy Prime Minister and Foreign Minister of Ethiopia met in his office today (July 07) ambassadors and diplomats of the Nile riparian states in Ethiopia for a briefing on the latest status of the GERD negotiations.

During the meeting, the Deputy Prime Minister and Foreign Minister said the GERD represents the common aspirations of all the riparian countries to equitably and reasonably utilize the water resource without significantly harming downstream countries.

In this regard, Mr. Demeke said the latest attempts made by Sudan and Egypt to take the GERD issue to the UN Peace and Security Council by mobilizing the League of the Arab States would unnecessarily internationalize and securitize the matter.

It also leaves a dangerous precedent and takes the negotiation process away from the African Union standing contrary to the principle of solving African problems through African-led mechanisms, he added.

He said Ethiopia believes that the GERD is a development project which does not fall under the mandate of the Security Council and called on the Council to respect the ongoing AU-led trilateral negotiations and process.

Mr. Demeke finally called on the riparian countries to forge a common front in opposing the approach taken by the downstream states, which undermines the role played by the African Union and accentuates the colonial and monopolistic claims of the two countries over the resource.

Ambassadors and representatives of the missions of the Upper Riparian Countries present at the meeting appreciated the initiative taken by Ethiopia to update them on matters of the GERD as they are the main stakeholders of the shared water resource.

They further underscored that the Issue of the Renaissance Dam is their concern too since all of them also aspire to utilize the Nile River for development purposes.

They said the GERD negotiations have been in the capable hands of the African Union so far, which should further be encouraged as the resource is African and the tripartite states are in Africa.

In this regard, they underscored that all of the negotiating parties should seek peaceful solutions under the AU-led process being committed to the principle of finding “African Solutions to African problems.”

The diplomats have finally underscored that the UNSC has no mandate to decide on the GERD that is purely a development project.

Ethiopians Protesting Against UNSC Meeting On GERD In New Your (July 8, 202...