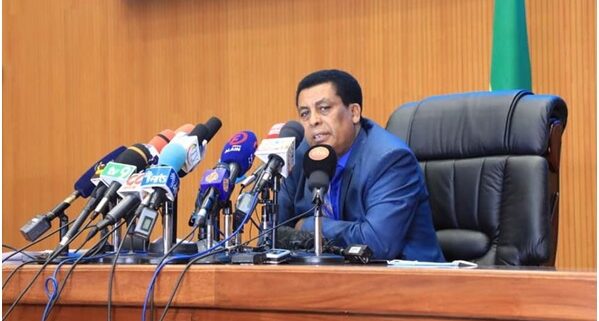 Spokesperson of Foreign Affairs of Ethiopia, H.E. Ambassador Dina Mufti, gave the Ministry’s biweekly press briefing today to the media with a special focus on the unilateral humanitarian ceasefire in Tigray and activities related to the GERD besides other major diplomatic activities over the week.

Somalia, Djibouti, the AU and China and Nigeria have sent congratulatory messages to Prime Minister Dr. Abiy Ahmed for the landslide win he and the Prosperity Party have registered in the 6th General elections. They affirmed to work closely with the new administration and strengthen relationships.

H.E. Demeke Mekonnen, Deputy Prime Minister and Minister of Foreign Affairs of Ethiopia had a meeting on Monday (July 20) with H.E. Ms. Annette Weber, European Union special representative for the Horn of Africa. The two sides have discussed the 6th general elections in Ethiopia, the filling of the GERD and the ongoing tripartite negotiation, the humanitarian ceasefire in Tigray, and the Ethiopia-Sudan border dispute. EU Special Representative Anita Weber, for her part, said the EU wants the joint investigation into human rights abuses to be expedited. She also expressed EU’s concerns over the possibility of a humanitarian crisis in the Tigray region. Mr. Demeke called on the European Union (EU) to understand that Ethiopia has a role in the stability of the volatile region and that the EU should act in a positive manner instead of putting unnecessary pressure on the Ethiopian government.

H.E Demeke Mekonnen Deputy Prime Minister and Foreign Minister of Ethiopia met on Friday (July 16) with the UN Undersecretary-General for the Department of operational support, Mr. Atual Khare. He assured the Secretary-General of the continued support of Ethiopia to the UN while MR. Atual, on his part, appreciated the role of Ethiopia in the UN peacekeeping mission.

Deputy Prime Minister and Minister of Foreign Affairs of Ethiopia, H.E. Demeke Mekonnen had a telephone conversation with the Minister of Foreign Affairs of the Republic of Malawi, Hon Eisenhower Mkaka. The Deputy Prime Minister and Foreign Minister said Ethiopia and Malawi have a long history of diplomatic relations which further needs to be strengthened in various fields. He also briefed Hon Eisenhower Mkaka about the ongoing joint UN-EHRC investigation on alleged crimes committed in Tigray which should not be interfered with unnecessary pressures. The Malawian Foreign Minister, on his part, thanked Mr. Demeke for his briefing on the current situation in the country and expressed his desire to strengthen relations between the two countries.

H.E. Ambassador Woineshet Tadesse has presented her letters of credentials on Monday (July 12) to President Felix Tshisekedi of the Democratic Republic of the Congo. During the occasion, the two sides exchanged views on ways to give new impetus to the longstanding relationships between the two countries. Ambassador Woinshet seized the opportunity to thank the people and government of the Democratic Republic of the Congo for the remarks made by the DRC representative in the recently held UNSC meeting on the GERD.

The Ministry has issued a press statement on a resolution by the European Union on the situation of human rights in Tigray adopted at the 47th Session of the United Nations Human Rights Council. Ethiopia rejects this resolution because: it is premature, politically motivated and it interferes with and undermines the integrity of the ongoing UN-EHRC joint investigations and other investigations by domestic institutions (the military justice system, regional law enforcement authorities and federal investigators and prosecutors). Constructive engagement, rather than a hasty decision by the Council, would have contributed to expeditiously bring the ongoing efforts to a successful conclusion. Those who were involved in committing crimes will be brought to justice and punished to the full extent of the law.

Ambassador of Ethiopia to Kenya, H.E. Meles Alem, met William Ruto, the Deputy President of Kenya, to discuss bilateral and regional issues. Mr. Ruto commended the fraternal relationships between the two countries and the brotherly people of Ethiopia and Kenya. He told Ambassador Meles that the construction of the Grand Ethiopian Renaissance Dam in Ethiopia is of great benefit not only to Ethiopia but also to countries in the region, including Kenya.He said the disputes between Ethiopia, Egypt, and Sudan over the GERD should be resolved through the African Union’s framework. Ambassador Meles thanked Kenya for its support to Ethiopia during the recently held UN Security Council meeting.

643 members of the 2nd battalion of the Ethiopian peace Keeping force under the UNMISS in Bor, were awarded the United Nations Peacekeeping Medals. Ethiopia contributes more than 2000 troops under the United Nations Mission in South Sudan (UNMISS). During the award ceremony UNMISS Deputy Force Commander, Maj. General Md Main Ullah Chowdhury and Ambassador Nebil, appreciated the endurance and determination of the troops in achieving their mission in very challenging and arduous conditions.

The second filling of the dam has been successfully completed prior to its scheduled time. Ethiopians are celebrating not because they fill the dam but it shows to the world that the truth has prevailed. The truth is that the filling of the dam would not significantly harm downstream countries. Neither Egypt nor Sudan has suffered harm because of it. Instead we believe that the filling has saved Sudan from excessive flooding. Had Egypt and Sudan been Negotiating in good faith, we would have reached a win agreement a long time ago.

A. Statement by H.E. Ambassador Redwan

State Minister H.E. Redwan Hussien has explained the major issues that threatened to stall the unilateral humanitarian ceasefire declared by the Federal Government. He expressed his confidence that the people of Ethiopia would show the usual resilience to surpass current problems. He also called upon the following issues to the attention of the international community:

Agency for Refugees and Returnees Affairs has issued a statement on the situation of Eritrean Refugees in Tigray. It said,

The Ethiopian Civil Service University, in collaboration with the Ministry of Foreign Affairs and the Ethiopian Foreign Relation Service Institute, graduated 153 Diplomats in Diplomatic and International Relations. The graduates received their postgraduate diplomas from State Minister of Foreign Affairs of Ethiopia, H.E. Ambassador Birtukan Ayano.