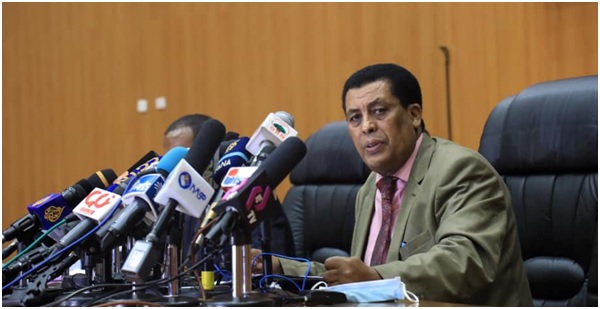 Spokesperson of Foreign Affairs of Ethiopia, H.E. Ambassador Dina Mufti, gave the Ministry’s biweekly press briefing today (29 July 2021) to the media with a special focus on the repatriation of Ethiopians from the Kingdom of Saudi Arabia and activities related to citizen centered diplomacy and other diplomatic activities over the week. Please find summary of the Press Briefing here:

H.E. Demeke Mekonnen, Deputy Prime Minister and Foreign Minister of Ethiopia had a meeting with H.E. Ramtane Lamamra, Minister of Foreign Affairs and National community Abroad of the People’s Democratic Republic of Algeria. On the occasion, Mr. Demeke gave a briefing on the second filling of the GERD which was done according to the DoP which was signed among the tripartite in 2015. The briefing also included the humanitarian ceasefire in Tigray, where the government of Ethiopia stayed committed despite the terrorist TPLF’s disrespect to peace. They noted the importance of cementing relationships with expanded engagements. Mr. Demeke also stated Ethiopia’s readiness to host the 5th Joint Ministerial Commission (JMC), which was postponed last year due to the COVID-19 pandemic.

H.E. Demeke Mekonnen, Deputy Prime Minister and Foreign Minister of Ethiopia had a meeting with Ms. Rosemary A. DiCarlo, UN Under-Secretary-General for Political and Peacebuilding Affairs. The discussion between the two sides included the situation in Tigray the GERD negotiations, the 6th General elections and the Ethiopia-Sudan border dispute. The major points are:

Ethiopian Ambassador to Djibouti H.E. Berhanu Tsegaye has discussed with MARY NJOROGE, Representative & Country Director of WFP in Djibouti. Ambassador Berhanu said the international community should spare no time to condemn TPLF that has repeatedly shown its utter disregard and cruelty to the people in Tigray by blocking essential aid to the region. He said although TPLF has continued to disrupt & endanger the free movements of trucks, the government of Ethiopia has doubled its efforts believing it is vital to meet the growing demands in the region.

II. On returnees from KSA

In Addis Ababa, the Government in cooperation with humanitarian partners such as IOM, ERC, and MSF Spain established an operation to provide humanitarian assistance on arrival and facilitate a safe return to home communities. On arrival, the migrants are assessed for vulnerabilities and special needs and referred accordingly. Unaccompanied and separated children were reunified by the government following family tracing and best interest determination.

To help our citizens rebuild their lives in Ethiopia, the Ministry of Labour and Social Affairs is working with development actors to provide reintegration support for some of the migrants. Others have been referred to the private sector for job opportunities. However, the needs outstrip available resources. Hence, the government is appealing for other cooperating partners to be part of an effort to reintegrate individuals and empower households and communities to resist the pull irregular migration of irregular migration.

The Government under the leadership of the Office of the Attorney General has strengthened the laws and created partnerships needed to combat human trafficking and illicit migrant smuggling. Most of the migrants are smuggled to transit countries and exposed to human rights violations and deprivations. The Immigration Agency is undertaking concerted efforts to strengthen border management and reduce smuggling and human trafficking.

In June 2021, our government and the Kingdom of Saudi Arabia agreed to prioritize the repatriation of Ethiopian nationals subjected to prolonged detention due to mobility restrictions resulting from the COVID-19 pandemic. Almost 42,000 citizens (84% male, 16% female) have since been repatriated in one month. To accommodate an operation of this magnitude amid the ongoing public health challenges caused by the COVID-19, the Government set up 8 reception centers in Addis Ababa to temporarily shelter the migrants as they transit to their final destinations. The government allocated personnel and financial resources to provide the migrants with health care, feeding, psychosocial support and physical safety. Our partners are running an additional 4 shelters providing similar services but focused on migrants with special needs such as unaccompanied and separated children, mothers with babies, and human trafficking survivors. Admission to the centers is on a voluntary basis and the migrants enjoy the freedom of movement, including the right to leave anytime.

All migrants are provided a transport allowance to their final destinations safely. Unfortunately, the ongoing hostilities in Tigray have made it logistically impossible for many migrants to return to their homes in that region. The affected returnees are helped to reunify with extended family in peaceful parts of Ethiopia. Those who do have family members to reunify with are being provided longer-term stays at dedicated reception centers until such a time when their return to Tigray is feasible and safe.

Although a lot has been achieved so far in repatriating citizens from KSA, some challenges (new and lingering ones) remain to be tackled. The Government of Ethiopia is working with relevant authorities in Saudi Arabia to tackle challenges. In this regard, the two governments are working to avoid arbitrary detention of Ethiopian citizens, provide protections to property, facilitate a dignified return for voluntary migrants and work on the expedited full implementation of the labor agreements between the two countries.

Officials from the Ministry of Foreign Affairs have paid a visit to North Shoa Zone and Oromo special Administration Zones in the Amhara Regional State. Jile Timuga and Efrata Gidem woredas were affected by conflict and the Ministry wants to show its solidarity with the affected people and support the rehabilitation process. State Minister for Foreign Affairs, H.E. Tsion Teklu, in her speech at the event, said the visit was organized to show support to affected people and denounce the efforts of the anti-peace forces and restore peace and stability in the country. She said the Ministry has provided 200,000 birr each for the rehabilitation of the two affected areas, adding that the Ministry and its missions around the world will mobilize Ethiopians and people of Ethiopian descent to further support the rehabilitation process.

Members of the Ethiopian Community Association in Riyadh, Saudi Arabia, in collaboration with the FDRE Embassy in Riyadh have provided food and non-food items to 1221 Ethiopians at a women’s migration Center in Riyadh. The embassy thanked the community members for their support.

The Minister of Culture and Tourism of the Federal Democratic Republic of Ethiopia, Dr. Hirut Kassaw, spoke to Ethiopians and people of Ethiopian descent in Japan regarding the Tokyo 2021 Olympic Games and other national issues. She thanked the Ethiopian community in Japan for their positive response to the request for assistance in controlling the COVID19 pandemic, the construction of the Grand Ethiopian Renaissance Dam, the law enforcement operationand support for IDPs. She also called on Ethiopians and people of Ethiopian descent in Japan to promote and encourage Ethiopian athletes on various social media platforms.

Ethiopians of the Somali region who are living in Kenya are urged to invest in their country. Officials from various offices of the Somali Regional State met with scholars, investors and youths in Kenya to discuss the current situation in their country and region. The head of the Somali Regional State’s Diaspora and Investment Bureau, Abdisalam Yusuf, called on the region’s people and other investors to invest in the state. He called on the people to contribute to the Great Renaissance Dam, to help people displaced by various conflicts and to strengthen the Ethiopian Defense Forces. FDRE Ambassador Meles Alem responded to questions from attendees.

Ethiopians living in Washington DC have made a rally to show solidarity and collect funds in support of the ENDF and the GERD. H.E. Dr. Eng. Seleshi Bekele, H.E. Ambassador Fitsum Arega and H.E. Ambassador Taye Atske Selassie were present at the rally and have delivered speeches acknowledging the Diaspora support to their country and encouraging further participation on things that matter in Ethiopia. More than $ 100,000 was collected at the rally.

Ethiopians and people of Ethiopian descent living in Australia have held an online discussion to commemorate the success of the second round of the Grand Renaissance Dam. They have their delight over the successful completion of the second round of the Grand Ethiopian Renaissance Dam. In his opening remarks, Dr. Muktar Kedir, Ambassador of the Federal Democratic Republic of Ethiopia to Australia, said the construction of the Grand Renaissance Dam is a manifestation of our unity and sovereignty and a renaissance project of the current generation. He further called on participants to continue supporting the project.

Ethiopians and people of Ethiopian descent participated in a fundraising program organized by the Ethiopian Community in Munich. The program with the purchase of bonds, magazine sales and donations for the Grand Ethiopian Renaissance Dam has raised more than 15,000 Euros.