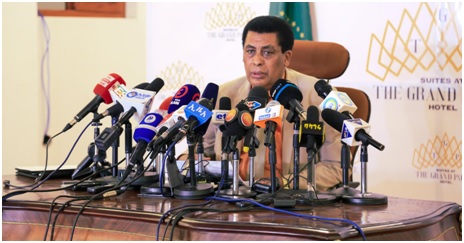 The Spokesperson of The Ministry of Foreign Affairs of Ethiopia , H.E. Ambassador Dina Mufti, has presented the Ministry’s biweekly press briefing today (February 23) focusing on political diplomacy, the current situations in Tigray, the Ethiopia-Sudan border issue, including major activities related to Economic Diplomacy, citizen-centered diplomacy and activities in capacity building. Please find the summary report below:

Deputy Prime Minister and Foreign Minister H.E. Demeke Mekonnen, paid an official visit to India from 17-19 February 2021. The Deputy Premier held bilateral talks with the External Affairs Minister of India, h.E. Dr. S. Jaishankar during his visit. He has inaugurated the newly built Ethiopian embassy and residence building and participated in a business forum that aimed to strengthen relations between the two countries. The visit was accompanied by the signing of visa waver agreement for diplomatic passport holders and a Memorandum of Understanding between educational two institutions.

H.E. Demeke Mekonnen, Deputy Prime Minister and Minister of The Ministry of Foreign Affairs of Ethiopia and H.E. Mevlüt Çavuşoğlu, Minister of Foreign Affairs of Republic of Turkey had a discussion last week in Ankara on ways to strengthen the relationship between the two countries. On the occasion, Mr. Demeke appreciated the all-weather friendship of Turkey and Ethiopia and called on to expedite the growth momentum of the Ethio-Turkish cooperation and strategic partnership. The two senior officials had participated in an inauguration ceremony of the newly built Ethiopian embassy and residence building in Ankara.

Deputy Prime Minister and Foreign Minister of the Ministry of Foreign Affairs of Ethiopia, H.E. Demeke Mekonnen had a phone conversation on February 11 with State Councillor & Minister of Foreign Affairs of China H.E. Mr. Wang Yi about current humanitarian supports in the Tigray region, cooperation against the COVID19 pandemic, the negotiations over the GERD and the Ethiopia-Sudan border dispute.

Deputy Prime Minister and Foreign Minister H.E. Demeke Mekonnen received at his office on February 10 the #EU Envoy and Minister of Foreign Affairs of Finland, H.E. Pekka Haavisto. At the meeting, Mr. Demeke briefed the Envoy on the ongoing rehabilitation and reconstruction activities in the Tigray region. Mr. Pekka Haavisto, following his visits in Ethiopia said (on his twitter page) that he has spent two intensive days in Ethiopia, held substantive meetings with Prime Minister Abiy Ahmed Ali, President Sahle Work and and other key ministers mainly on the issue of humanitarian access to Tigray. He said, International humanitarian organizations are doing good work.

State Minister H.E. Ambassador Redwan Hussein had a meeting with resident Asian Ambassadors on the pertinent issues of national and regional significance. In the meeting, border issues, GERD and Current affairs are covered. Regarding the humanitarian support in Tigray, he said, all the assistance coming from partners is less than 1/3 of what is required. What the Ambassador underlined was that “real partners” should help the government take care of its citizens providing all the necessary support rather than being taken away by disinformation and other negative campaigns that add nothing to lessen the suffering of affected people.

Ethiopia and Israel held a fruitful and productive political consultation virtually on February 15, 2021, reaching a common understanding to intensify their long-standing and historical relations in bilateral, regional, and multilateral fields. The Political Consultation was held on a special occasion to celebrate the 30th year anniversary of the opening of the Ethiopian Embassy in Israel with the spirit of the 3000 years of historical friendship and partnership.

• Over the past three months, 75 members of international organizations who have applied for access to the Tigray Regional State have been granted access to support the humanitarian and rehabilitation process.

• 70% of food items covered by the Ethiopian government and 30% by development partners and NGOs.

• Prime Minister Dr. Abiy Ahmed Ali and the regional presidents and city administrators launched a solidarity initiative for the Tigray Regional Provisional Administration and the people of the region. The solidarity initiative aims at mobilising the contribution of regions and federal institutions as well as other stakeholders in supporting humanitarian efforts underway.

• Ethiopian Red Cross has refuted AFP’s misquoted report issuing a statement that said, “the President was not referring to geographical location. He was rather expressing lack of capacity and shortage of resources we are currently encountering. The fact that we have so far reached close to 400, 000 beneficiaries in Tigray, even less than 20% of the total beneficiaries in need of assistance is what our president alluded to…”

• One of the two Electricity power lines in the Tigray region (i.e., Alamata-Mehoni-Mekelle power line) was cut off by members of the TPLF clique in the Adigudom area. The line had been badly damaged in the past, and it took a long time to repair. The other power line in the region (the Tekeze-Axum line) is under construction. Ethiopian Electric Power is working to rehabilitate the damaged infrastructure. The clique has shown to the world, once again, that it has a complete disregard to the wellbeing of the people of Tigray.

• There are various allegedly committed atrocities and crimes in Tigray (such as the killings of many people in Axum, sexual violence against women, denial of access to the region, the presence of Eritrean troops and many other).

• Although the Government of Ethiopia has officially refuted the claims of using ‘hunger as weapon,’ it also understands that rape, plunder, callous and intentional mass killings, as observed and verified in Mikadra, and every other imaginable crime could have happened in Tigray where many are illegally armed, the legal and administrative structure compromised and 13000 prisoners are intentionally released.

• The government of Ethiopia has been diligent to end the impunity in Tigray achieving notable results so far. Any serious offense committed against the rights of citizens, including refugees in the region will be investigated and perpetrators will be brought to justice. To this end, the Interim government in Tigray, the Federal Police and the Attorney General will independently investigate any allegedly committed crime.

• We have issued a statement on Thursday (February 18) condemning the “provocative behavior”, of the Sudan on the joint border adding that it will cause damage to the two countries. We have stated that the Ethiopian government strongly believes that the conflict being trumpeted by the Sudanese government’s military wing could only serve the interests of a third party at the expense of the Sudanese people.

• Our standing has always been consistent, the Sudanese army has to withdraw from our land, then we will start to negotiate and solve the issue through existing mechanisms.

• Coordinated by our embassy in Djibouti, a delegation comprised of more than 21 people from Djibouti Tourism, Tour Operators’ Association, and Hotel Owners as well as scores of Ethiopian have had a three-day business forum in Addis Ababa. It was aimed at reviving intraregional tourism at the time where COVID-19 has depressingly affected the sector.

• 1669 citizens were repatriated from Jidda and Riyadh from February 8-22.