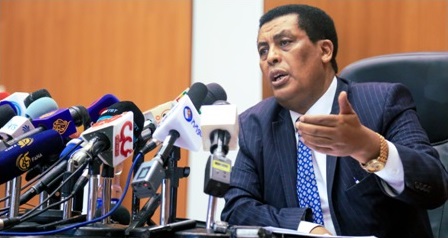 The Ministry of Foreign Affairs of Ethiopia, H.E. Ambassador Dina Mufti, gave the Ministry’s biweekly press briefing today (16 March 2021) to the media. In his presentation, the Ambassador focused on political diplomacy, economic diplomacy and citizen-centered diplomacy, including capacity building activities.

• Deputy Prime Minister and Foreign Minister of Ethiopia, H.E.DemekeMekonnenon Thursday (March 11) met with the Chairperson of the African Union Commission, to discuss the modalities of engagement of the African Commission on Human and Peoples Rights (ACHPR) in the investigation of alleged human rights violations in the Tigray region of Ethiopia. The principle of the investigation was proposed by Dr. Abiy Ahmed, Prime Minister of Ethiopia, during a Summit-level meeting of the AU Peace and Security Council held on 9 March 2021. Mr. Demekeappreciated the AU’s initiative to accept Ethiopia’s invitation for a joint investigation on alleged atrocities committed in the region. The Chairperson of the Commission welcomed the readiness of the Ethiopian Government to cooperate with the African Union’s Treaty Body. The Chairperson expressed his appreciation to the Government of Ethiopia for its openness to engage with the African Union and stated his confidence that the ACHPR will deliver on this important task.

• H.E. DemekeMekonnen, Deputy Prime Minister and Minister of the Foreign Affairs of Ethiopia met on Tuesday (March 9) with South Sudan’s President, SalvaKiirMayardit at his residence in Juba. They pledged to scale up relationships between the two countries by expanding vital engagements and noted the importance of scaling up cooperation on Regional Stability and Capacity Building schemes. The two sides further noted the role of the successful completion of the law enforcement operation in the Tigray region to regional peace and underscored the only viable way to solve the Ethiopia-Sudan border issue is dialogue.

• Deputy Prime Minister and Foreign Minister H.E. DemekeMekonnen exchanged a phone call with H.E. PekkaHaavisto, Minister of Foreign Affairs of Finland on Friday (March 12).The two sides discussed the situation in the Tigray region and the Ethiopia-Sudan border dispute, including the negotiations over the GERD. Humanitarian situation, rehabilitation and rebuilding efforts and the recent talks with the African Union to hold joint investigations on allegations of ethnic cleansing were the points discussed regarding Tigray. Regarding the GERD the two have discussed that the tripartite need to resume dialogue to reach amicable solutions. Discussing the Ethiopia-Sudan border dispute, Mr. Demeke underlined that the two countries can solve the problem through dialogue by employing existing mechanisms.

• Deputy Prime Minister and Foreign Minister, DemekeMekonnen welcomed to his office Russian Ambassador to Ethiopia, EvgenyTerekhin on Wednesday (March 10) to discuss issues of mutual concern. Speaking about the investigations on alleged atrocities committed in Tigray, Demeke reiterated Ethiopia’s stance that was reflected in the recently delivered statement of H.E. Prime Minister Abiy Ahmed to the African Union Peace and Security Council on the Current Situation in Northern Ethiopia. In this regard, he said, Ethiopia has expressed its will to openly engage the African Commission on Human and People’s Rights in undertaking investigations jointly with the Ethiopian Human Rights Commission, adding that the government has also signaled its willingness to collaborate with relevant UN agencies for these investigations.

• Deputy Prime Minister and Foreign Minister of Ethiopia H.E. DemekeMekonnen met at his office and held a one-to-one discussion with the Ambassadors of South Korea and Japan to Ethiopia on Friday (March 12). Discussing with H.E. Ambassador Kang Seok-hee of the Republic of Korea, the Deputy Prime Minister appreciated South Korea’s supports in times of critical needs.South Korea’s support in providing pharmaceutical equipment and sharing its experience to help Ethiopia fight the COVID19 pandemic is very much appreciated by the people and government of Ethiopia, he added. He also thanked the development support programs of the government of Japan through Japan International Cooperation Agency (JICA) in Ethiopia.He also briefed the Ambassador on the ongoing massive humanitarian undertakings of the government in the Tigray region, including other developments.

• DemekeMekonnen, Deputy Prime Minister and Minister of Foreign Affairs of Ethiopia conferred on Thursday (March 11) with Mohamed Salem OuldSalek, Foreign Minister and Special Envoy of the President of the Sahrawi Arab Democratic Republic. They discussed issues of common concerns and Ethiopia’s role in the peaceful solution to the problem of the Sahrawi Arab Democratic Republic. Demeke assured that Ethiopia has always been consistent in its support for a fair, just, lasting, and mutually acceptable political solution consistent with the principles and purposes of the AU Constitutive Act and the UN Charter. Ethiopia will stand with and support the position of the role of the African Union in the peace process under the auspices of the UN and ready to contribute its share, he added.

• About 40 resident ambassadors and diplomats in Addis Ababa paid a visit to Mekelle city on Wednesday (March 10). Dr. MuluNega, Chief Executive of the Interim Administration of Tigray and colleagues briefed the ambassadors about current situations in Tigray, particularly on the rehabilitation and rebuilding efforts as well as security issues in the region. Challenges and results achieved in rebuilding damaged infrastructures, reopening public service institutions, rehabilitating IDPs, and delivering humanitarian supports were discussed in detail.

• Ambassador and Permanent Representative of Ethiopia to the United Nations, H.E. Taye Atske Selassie held a bilateral discussion with Ambassador Linda Thomas-Greenfield of US. Representative to the United Nations. The two discussed the humanitarian situation in Tigray and other regional and international matters of mutual concern. They agreed to reinforce working relations between the two missions.

• Ethiopian Ambassador to Sudan, H.E. Yibeltal Aemero gave a press briefing to local and international media outlets in Sudan today (March 10) regarding the current situation in the Tigray region. He said the embassy prepared the briefing as it is important for the brotherly people of Sudan to have accurate and up-to-date information on the situation in Ethiopia. In his briefing, Ambassador Yibeltal spoke about the atrocities committed by the TPLF against the Ethiopian people since its inception, the horrific attacks on the national defense forces, the genocide in Maikadra, the efforts to bring criminals to justice in the region.

• Ethiopian Ambassador to Uganda, H.E. Ambassador Alemtshay Meseret met and held talks with the Minister of Foreign Affairs of Uganda, H.E. Sam Kahamba Kutesa on Thursday (March 11). During their discussion, the two sides noted the ever-increasing Ethiopia-Uganda relations in multifaceted sectors. They have also exchanged views on the ongoing humanitarian efforts in Tigray, the Ethiopia-Sudan border dispute, and the tripartite negotiations over the GERD.

• Ethiopia’s Consulate in Shanghai and “International Tourism Group” in China has organized an online panel aiming to increase the flow of Chinese tourists to Ethiopia. Speaking on the occasion, the Director-General of Tourism Ethiopia said that the Chinese government has made Ethiopia one of the few African countries on the list of Approved Tourist Destination for Chinese tourists, which is one of the few African countries registered in the list.

• The Ministry has paid its condolences to people who have lost their lives in the recent incident in Yemen’s prison. 43 are buried in Yemen but investigation is underway to identify how many of them are Ethiopians. About mid day today we are expecting to receive 150 people who are repatriated from Yemen.

• Ethiopians in the U.S., Canada and Europe and other cities in the West have staged demonstrations aiming to affirm facts on what is going on in Ethiopia right now. H.E. Demeke Mekonnen, Deputy Prime Minister and Foreign Minister of Ethiopia appreciated all people who have organized and participated in the rallies standing for Truth, Justice and Sovereignty over internal affairs.

• A total of 888 returnees from Riyadh and Jeddah were repatriated over the week.

• Young diplomats of the Ministry have been given training on digital diplomacy themed under, “Digital Diplomacy in Action”.

Statement by the Delegation of Ethiopia in exercising the right of reply under...