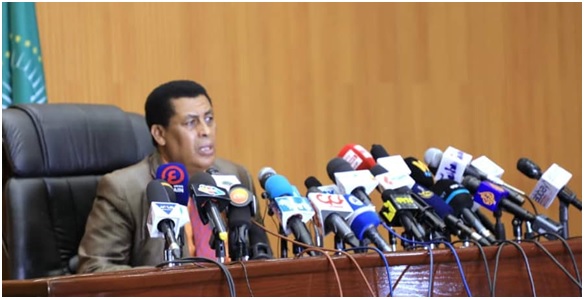 The spokesperson of The Ministry of Foreign Affairs of Ethiopia, H.E. Ambassador Dina Mufti, gave the Ministry’s biweekly press briefing today (24 June 2021) to the media. In his presentation, the Ambassador focused on political diplomacy, the 6th general election Economic diplomacy, citizen-centered diplomacy and capacity building activities.

II. On the 6th General Election

A. The messages of the 6th general elections

B. Message of the Prime Minister

C. The Elections according to AU observers and EASF

Organized by the African Union (AU), a press conference was addressed yesterday by the Head of the African Union Election Observation Mission to Ethiopia, H.E Olusegun Obasanjo in the presence of the AU Commissioner for Political Affairs, Peace and Security (PAPS), H.E. Amb. Bankole Adeoye and other invited guests. Similarly, The Eastern Africa Standby Force Election Observation Mission (EASF EOM) which consists of 26 observers from the EASF Member States namely; Burundi, Djibouti, Kenya, Somalia, Seychelles, Uganda, Rwanda and Comoros has held a press conference the day before yesterday announcing preliminary assessment results of the election. Generally, the observers’ statements stated:

Some corners have voiced concerns over issues that may compromise the electoral process and put the legitimacy of the election results under a question mark. The most prominent issues are the situation in Tigray, some border disputes between some regional states in the country, the fact that some opposition groups are boycotting the elections, and logistic concerns overshadowing the efforts of NEBE.

The Ethiopian Embassy in Djibouti and the Ethiopian Construction Works Corporation (ECWC) signed a Memorandum of Understanding to refurbish a building that had served as the Ethiopian Embassy and Consulate since the second half of the 1960s to 2003 G.C. State Minister of Foreign Affairs of Ethiopia, H.E. Ambassador Birtukan Ayano, who was on a working visit to Djibouti, attended the signing ceremony and expressed her belief that the renovation of the building would reflect its historical attachment to Ethiopia and Djibouti besides promoting Ethiopia’s image positively. In related news, the delegation had also paid a visit to the status of the renovation and construction works of the Ethiopian embassy building in Djibouti.