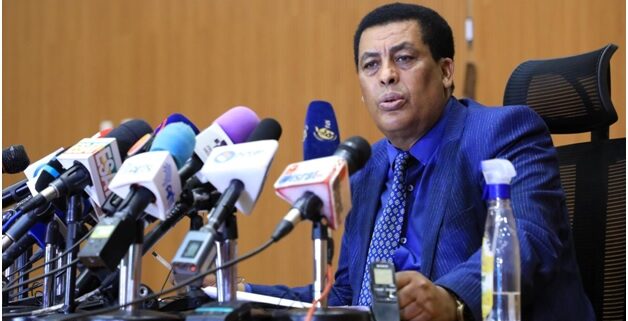 Spokesperson of The Ministry of Foreign Affairs of Ethiopia, H.E. Ambassador Dina Mufti, gave the Ministry’s biweekly press briefing today (11 May 2021) to the media. In his presentation, the Ambassador focused on political diplomacy, (with a special attention on the GERD negotiation and the situation in Tigray), economic diplomacy and citizen-centered diplomatic activities.

H.E. Mr. Demeke Mekonnen, Deputy Prime Minister and Foreign Minister of Ethiopia had a discussion on Monday (May 10) with the U.S. special envoy to the Horn of Africa, H.E. Mr. Jeffrey Feltman. The discussion between the two sides included the current status of the humanitarian support and rehabilitation activities in Tigray, the negotiations over the GERD and the Ethiopia-Sudan border issue. They underscored the dam file and the border dispute should get peaceful resolutions. They also noted the importance of strengthening the longstanding relationship between the two countries.

Deputy Prime Minister and Minister of Foreign Affairs H.E. Demeke Mekonnen met with the President of the Republic of South Africa, H.E Mr. Cyril Ramaphosa and had a very fruitful discussion on both bilateral and regional issues. During the meeting, H.E Demeke Mekonnen informed the President on current issues in Ethiopia. Discussing the AU led trilateral negotiation on the GERD, H.E Mr. Demeke emphasized Ethiopia’s firm commitment to continue the negotiations under the AU framework and reach a mutually acceptable outcome to the three countries. Mr. Demeke expressed Ethiopia’s profound appreciation to H.E President Ramaphosa for his leadership in promoting African solutions to Africa’s problems.

H.E. Demeke Mekonnen, Deputy Prime Minister and Foreign Minister of Ethiopia had held a discussion on Tuesday (May 04) with Comoros Foreign Minister, H.E. Dhoihir Dhoulkamal on bilateral issues and the tripartite talks over the GERD. Mr. Dhoihir Dhoulkamal expressed his country’s confidence that the tripartite would solve outstanding issues over the dam through a round table discussion. Mr. Demeke

State Minister, H.E. Ambassador Redwan Hussien had a briefing with Ambassadors of the members of the UN Peace and Security Council and South American countries residing in Ethiopia on critical issues in the country, including the situation in Tigray. In his briefing on the situation in Tigray, Ambassador Redwan said the government made significant strides in addressing many of the concerns of the international community. In this regard, he said:

• The issue of access to humanitarian support has been adequately addressed with the notification system that is now in place. Some of the pocket areas that were inaccessible are now being reached out through military escort.

Spokesperson of the Ministry of Foreign Affairs of Ethiopia, H.E. Ambassador Dina Mufti gave a briefing to international media outlets stationed in Addis Ababa about the status of the GERD negotiations, the Ethiopia-Sudan border issue, and the upcoming general elections. Main points:

On the upcoming election

Ambassador Nebil Mahdi met with Hon. Dr. Barnaba Marial Benjamin, Minister of Presidential Affairs of the Republic of South Sudan and exchanged views on issues of common concern. Ambassador Nebil briefed the Minister on the latest improvements in the Tigray region, notably the relief and humanitarian efforts being conducted by the Ethiopian Government. He further shared developments regarding the Ethiopia-Sudan border dispute, the GERD negotiation, and the upcoming Ethiopian National Election.

H.E Melaku Legesse, Ambassador Extraordinary and Plenipotentiary of the Federal Democratic Republic of Ethiopia to the Republic of Senegal presented the copy of his credentials to the Minister of the Foreign Affairs of Senegal, H.E. Aissata Tall Sall. On the occasion, Ambassador Melaku Legesse and Aissata Tall Sall exchanged views on further strengthening the longstanding bilateral relationship between the two countries.

H.E. Adem Mohammed – Ambassador of the Federal Democratic Republic of Ethiopia to the Republic of Turkey -presented his Letter of Credence to President Recep Tayyip Erdogan at the Presidential Complex in Ankara. During the ceremony, President Erdogan underlined the great importance his country attaches to its relationship with Ethiopia and emphasized that the two countries should make use of the wide range of economic, cultural and diplomatic opportunities that exist between them to bring their cooperation to the highest level. The Ambassador, on his part, alluded to the strategic partnership that exists between Ethiopia and Turkey and expressed his readiness to spare no effort to further consolidate the excellent partnership between Ethiopia and Turkey.

State Minister H.E. Tsion Teklu had a discussion with the Ambassador of France to Ethiopia on the situation of companies led by French investors in Ethiopia. The two sides also talked about available investment opportunities in Ethiopia that have the potentials to draw several French investors to the country’s market.

H.E. Demitu Hambisa, Ambassador of the Federal Democratic Republic of Ethiopia to the Republic of Italy, opened a new Honorary Consulate of Ethiopia in Torino, Italy on Saturday (May 08). Engineer Franco Rubini is the new Honorary Consul of Ethiopia in Torino. He was a lecturer in Building Engineering in the Faculty of Engineering of the Polytechnic University of Turin and now a Director of ACTA. Honorary Consul Eng. Franco Rubin, on his part, promised to strengthen trade, tourism, economic and cultural relations between Ethiopia and Piedmont, Italy, and also to provide support to Ethiopians in Piedmont.

Ethiopian Ambassador in Sudan, H.E. Yibeltal Aemero has a discussion with scholars in from three higher institutions in Sudan on ways to further strengthen people-to-people relations between the two countries.

Ethiopians and Eritreans residing in London and Scotland made rallies supporting the government of Ethiopia in its law enforcement operation and its stance over the GERD negotiations. They have called on the government to bring instigators of ethnic-based violence in the country and condemned the mis/disinformation campaigns of foreign media outlets on situations in Ethiopia.

Ethiopia has repatriated a total of 1168 of its citizens from Kenya (in collaboration with UNHCR), Beirut- Riyadh, Jeddah and Yemen.