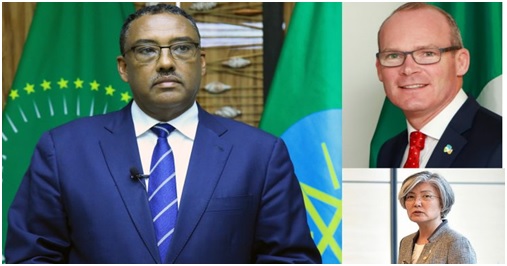 Demeke briefed them on how the TPLF clique has been playing destructive roles in the country undermining the comprehensive socioeconomic reform that brought hope to the people of Ethiopia.

He said the group’s abysmal attack on the Ethiopian Defense forces on 4 November 2020 had ended the limits of the government’s patience and necessitated the operation to restore rule of law in the region.

The possibility of protracted insurgency that the disgruntled elements of the TPLF clique could carry out in the region is a pipe dream as they have no legitimate cause to fight against the government, he added.

By now the operation is over, he said, and the government is giving its utmost attention to rehabilitation and restoration works with close communication with the interim government in the region while increasing efforts to apprehend fugitives.

Thanking him for the briefing, the Foreign Minister of Korea expressed her concerns about the safety of South Koreans in the region.

Demeke assured her that the government has frequent contacts with the identified South Korean citizens and is helping them to frequently communicate with relevant South Korean bodies in the country.

Talking with the Foreign Minister of Ireland about humanitarian assistance given to affected people, Demeke said the government is actively working with international organizations in delivering food and non-food items to people in some areas of Tigray.

The Ethiopian government is communicating with the government of Sudan to repatriate displaced people to their homes, he said.

The cases of some of the refugees in Sudan that have been accused of being associated with the massacre in Tigray will also be investigated, he added.

The phone conversations ended with the Foreign Ministers thanking Demeke for addressing their concerns and briefing on the latest situations in the Tigray region.