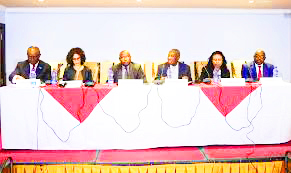 Speaking at a forum on enhancing the evaluation capacity of the progress of
implementation of SDGs and Agenda 2063 being held in Addis Ababa (December
10-12), UNICEF’s Director of Evaluation, George Laryea-Adjei said “Ethiopia
continues to champion the sustainable development of Africa at UNICEF and the
whole UN”.
A high-level Ethiopian delegation led by Getachew Adem, State Minister of National
Planning Commission is taking part in the two-day forum, which aimed at
enhancing national evaluation capacities of member states of the African Union.
State Minister Getachew Adem noted the importance of evidence-based Voluntary
National Reviews (VNRs), which he said, included country-led evaluations.
The State Minister said SDGs and Agenda 2063 and the modalities of the review
instruments are aligned with Ethiopia’s national policies and development
framework.
He mentioned that Ethiopia had already submitted its VNR in 2017, adding that the
country has received positive feedback in such score.
The forum was organized by UNICEF in collaboration with the Permanent Mission
of #Ethiopia to the United Nations and the African Union and UNECA .