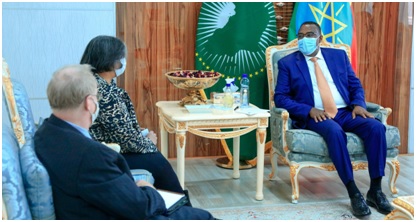 The two sides commended the longstanding and fraternal relationship that exists between Ethiopia and the United States.

Noting the multifaceted relationship between the two countries, particularly in education, health, and security issues, they underscored the need to scale it up with expanded engagements.

Ambassador Geeta said Ethiopia is the focal point for the US in the region and called on to work together for peace and security.

The Deputy Prime Minister used the opportunity to brief the US Ambassador on the genesis of the law enforcement operation in the Tigray region.

He said all of the belligerent actions and intransigence of the TPLF group left the federal government with no option other than to carry out the campaign to end impunity and restore law and order in the region.

Mr.Demeke’s briefing included situations on the aftermath of the active phase of the law enforcement campaign that necessitated the launching of a massive rehabilitation and rebuilding efforts by the government.

In explaining the existing situations currently, he reiterated that humanitarians and journalists have been given unimpeded access in the region and many are working on the ground.

In this regard, he said the government has covered 70% of the delivery of food and non-food items to about 3.8 million people in the region so far.

He expressed his hope that the unhindered access to humanitarian support in the region will be followed by extensive support from the international community.