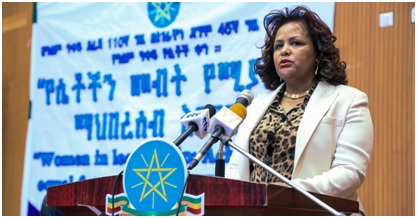 The Ministry of Foreign Affairs of Ethiopia celebrated today (March 8) International Women’s Day under the theme, “Women in leadership: Achieving an equal future in a Covid 19 world”.

On the occasion, State Minister H.E Ambassador Birtukan Ayano, said the day symbolizes the sacrifice paid by women, the successes achieved, and barriers that need to be removed for more equality.

There used to be very few women in diplomacy said the State Minister, but now we are witnessing advances through all of the reforms the Ministry has gone through so far.

She urged women in the diplomatic field to work towards achieving the economic and security interests of the country, promoting its positive images, and working for regional peace with the utmost discipline.

Women, children, and Youth Affairs Director-General at the Ministry, Ms. Etsegenet Bezabeh, on her part, said the day symbolizes the women’s struggle to secure economic, social, and political rights.

The day also represents the changes witnessed and the results achieved so far, she said adding the need to create heroes that define the digital era.

Participating in the panel discussion, Ambassador Gifti Abassiya, Ambassador Dr. Yeshimebrat Mersha, and other senior diplomats shared the struggles and hurdles they had to endure as women while serving their country.

On the occasion, senior women diplomats like Ambassador konjit Sinegiorgis were applauded for being pioneers in what was once a male-dominated field.

The program was finalized by acknowledging and awarding certificates to women who were deemed as role models in the diplomatic field.