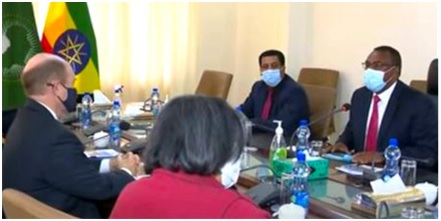 Deputy Prime Minister and Foreign Minister Demeke Mekonnen discussed with the U.S. Delegation led by senator Chris Coons on humanitarian situation in Tigray and other key issues on Saturday.

Deputy Prime Minister and Foreign Minister Demeke outlined a range of issues including the military operation in Tigray, border dispute with Sudan and the Grand Ethiopian Renaissance Dam.

Demeke briefed the delegation on the humanitarian situation in Tigray and the nature and purpose of the law enforcement the federal government carried out in the region.

Regarding the Grand Ethiopian Renaissance Dam, Demeke said that Ethiopia wants to stick to the trilateral negotiation which is under way under the auspices of the African Union.

Demeke briefed the delegate on the real situation in Tigray so as to shed light on the confusions that the US Government previously had about the military operation in the region.

Deputy Premier Demeke also told the delegation unequivocally that Ethiopia doesn’t want any interference in its law enforcement operation in its territory and explained about Sudan’s aggression in border areas of the nation.

Spokesperson of Ministry of Foreign Affairs Ambassador Dina Mufti, who attended the discussion, said that the face to face meeting was decisive to clear confusions woven by various elements and enable the US know the truth about what is really on the ground.

The meeting would help further relationship between Ethiopia and the US, Ambassador Dina noted.

There is strong willing on part of the Ethiopian government so as to create conducive situation for the investigations into alleged crimes of human rights violation through independent agencies including the UN Humanitarian agencies.

According to EBC, Senator Chris Coons, to his part, urged the government and partner organizations to intensify humanitarian assistance in Tigray.

This is the first high level delegation from the US since President Joe Baiden took office.