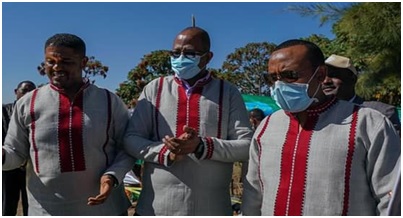 Prime Minister Abiy Ahmed has presided over the launch of construction of Wenchi project in Oromia regional state.

The event was attended by senior federal and regional government officials, including Tagesse Chafo, Speaker of the House of People’s Representatives (HPR).

The Prime Minister on the occasion said the Wenchi Dandi Eco-Tourism Project is expected to play a pivotal role to the development of tourism sector in the country in addition to its contribution to improve the lives of the locals.

Since the project would provide several services including horse riding and athletics sports competitions, it is expected to attract a lot of international tourists, he said.

The services rendered will create jobs to the local youth and help improve the lives of the farmers, he added.

The PM also announced plan to organize a half marathon road race after six months at Wenchi recreation site.

Wenchi is one of the three projects that would be implemented under the ‘Dine for the Nation’ program. The other two projects are Gorgora in Amhara and Koysha in SNNP regional states.

Ethiopians at home and abroad raised 4.2 billion birr for the three projects under the ‘Dine for Ethiopia’ program, an initiative launched by the Prime Minister last August.

The plan was to raise 3 billion birr but the initiative surpassed its target.

The three projects are expected to create jobs for the local communities, drive tourism and create service economies.

Final Notice from the Government of Ethiopia to All Allied With the TPLF Outlaws...