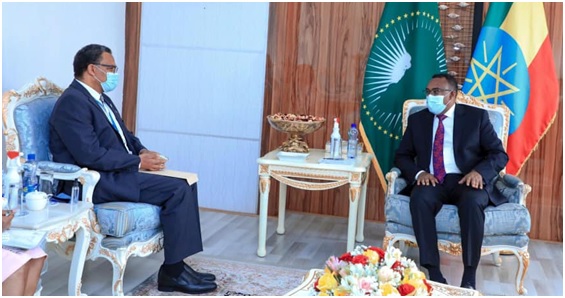 The Deputy Prime Minister congratulated WFP for winning the Nobel Peace Prize for 2020 for its efforts to support people who are endangered due to man-made conflicts and natural disasters.

He also praised the role played by the World Food Program (WFP) in providing humanitarian assistance to affected people in Tigray by refraining from unnecessarily politicizing the matter.

Appreciating the ongoing support from government institutions in Ethiopia, Mr. Hameed Nuru said WFP will continue to work together with relevant bodies in fulfilling its responsibilities.

In his discussion, the Director also explained the organization’s collaborative experience with the Ministry of Education of Ethiopia in registering encouraging results in the home-grown school feeding program.

Mr.Demeke also talked about situations in addressing the needs of people in the first and second rounds of humanitarian support in Tigray and the plan to carry out the third one soon.

He finally called on the international community to provide the necessary support to adequately address the needs of affected people in the region.

The Spokesperson Of The Ministry Of Foreign Affairs Of Ethiopia, Weekly Press...