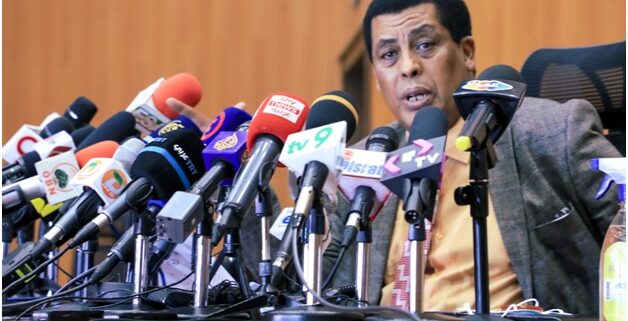 The spokesperson of Foreign Affairs of Ethiopia, H.E. Ambassador Dina Mufti, gave the Ministry’s biweekly press briefing today (19 May 2021) to the media. In his presentation, the Ambassador focused on political diplomacy, the situation in Tigray, the upcoming general elections, economic diplomacy and citizen-centered diplomatic activities.

The Ministry of Foreign Affairs of Ethiopia has issued a statement over the week opposing what seems a concerted campaign to exert undue pressure against Ethiopia and to make its position unequivocally clear on some of the most important and salient issues. The statement touched upon five points:

The issue of access has already been adequately addressed, what people need now is concrete support.

2. On allegations of human rights abuses

The federal government showed its seriousness over the issue of human rights abuses. Recent investigations and pledges to engage more on the process by the Federal Attorney General, the Federal Police Commission, the Ethiopian Human Rights Commission, the Ethiopian Human Rights Commission and the Office of the High Commissioner for Human Rights, the African Commission on Human and People’s Rights are manifestations of this commitment. Dwelling on the human right abuse allegations as if the government has done nothing in this regard serves no other purpose than unnecessarily politicizing the issue and exert undue pressure.

3. On calls for Ceasefire and national dialogue

The Ethiopian government has been consciously working to promote national dialogue build the necessary national consensus in the country to chart a better way forward. Various engagements with political parties, civic society and many other groups so far indicate the government’s commitment for peace. However, it should be clear that the push by partners to involve the TPLF, a terrorist group, in this national dialogue process is unacceptable.

4. On allegations of clampdown on dissent

The unwarranted and unsubstantiated allegations on the stifling of dissent and a crackdown on journalists that some media outlets propagate these days while the country gears up to hold national elections, has no other purpose than to tarnish the government’s image and undermine the electoral process. What needs to be made clear here is that the Ethiopian government has no desire to clamp down on dissent. Otherwise, it would not have invited most of the opposition groups and politicians as well as journalists, activists and others who were in exile to return to their country and operate freely. It knows full well that this approach has been tried and tested in the past but failed. The government does not believe that there are journalists or politicians jailed because of their political views and opinions. Those behind the bar are accused of violating the law. Therefore, they will have their day in court and the law will set them free if they are found not guilty. As far as foreign journalists are concerned, the government believes that it is not too much to ask them to strictly abide by the law of the land in carrying out their journalistic work.

5. On attempts to meddle in Ethiopia’s Internal affairs

There have also been repeated attempts to make unwarranted statements on Ethiopia’s internal affairs, particularly in relation to the Amhara regional forces. Ethiopia is a sovereign nation, and it cannot accept any dictates from outside on how to manage its own internal affairs.

• A steering committee established under the auspices of the Ministry of Foreign Affairs of Ethiopia to promote and market tourism in Ethiopia has held a meeting yesterday. H.E. State Minister Tsion Teklu chaired the meeting that discussed significant changes made in the sector after the establishment of the committee. The committee comprises 19 relevant organizations and 39 individuals.

• Ethiopian Embassy in Brussels hosted an Ethiopian Coffee Cupping event in the presence of professional coffee connoisseurs. The cupping event was organized in cooperation with renowned coffee roasters and tasters. H.E. Ambassador HirutZemene, on her opening remarks, said it was aimed at promoting the different varieties of Ethiopian coffee to Belgian coffee roasters and creating contract-based market linkages between Ethiopian Exporters and Belgian market, which is one of the major destinations of Ethiopian Coffee, she said.

• Consul General of the Federal Democratic Republic of Ethiopia in Guangzhou Ambassador Ewnetu B. Debela met and conferred with Ms.Guo Ningning, Vice Governor of the People’s Government of Fujian Province. They shared ideas to encourage and support Fujian enterprises invest in Ethiopia, to strengthen trade exchanges, to jointly promote tourism resources and establish practical cities to cities friendly twinning.

• Ambassador of Ethiopia to Republic of Cuba, H.E. Shibru Mamo, met with Mrs. Elba Rosa Perez Montoya, Minister of Science, Technology, and Environment (CITMA) of Cuba. During their meeting, the two sides discussed ways to implement the Memorandum of Understanding signed between Ethiopia and Cuba on Science and Technology. They have also deliberated on various issues of cooperation in science and technology including biotechnology, meteorology, and astronomy.

• Ethiopians and people of Ethiopian origin living in Washington DC made a rally calling on some international organizations and countries to stop unduly pressuring the Ethiopian government. Participants at the rally said Ethiopia has the right to maintain its territorial integrity, defend itself from aggressors, and dictations from third parties to do otherwise to a sovereign state should not be acceptable. Referring to the State Department’s recent statement on Ethiopia, they said it was influenced by unsubstantiated TPLF claims and sidelined the historical relationships between the two countries. They further said that the statement has undermined Ethiopia’s sovereignty and did not positively contribute to the peaceful coexistence of people in the country.

• Ethiopians and origins of Ethiopians living in Canada raised 50,000 Canadian Dollars while those in Germany raised more than one million birr to support the construction of the Grand Ethiopian Renaissance Dam.

Open Dialogue with International community in Ethiopia kicks off (May 19, 2...