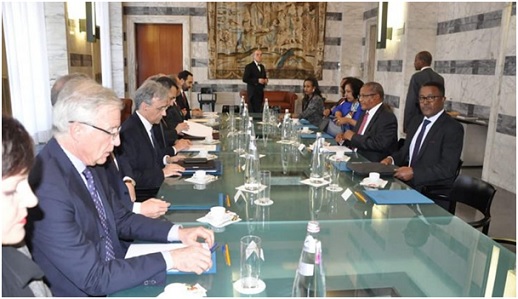 During the discussion, he emphasized Ethiopia’s commitment to further bolster the long-standing historical and people-to-people relationship between the two countries.

Gedu expressed his belief that conducting such a dialogue at the level of Foreign Ministers would facilitate the opportunity to jointly review bilateral and multilateral alliances and to consult on ways to further strengthen the cooperation between Ethiopia and Italy.

He urged the Italian Minister to support the implementation of bilateral and continental cooperation agreements signed between the two countries during the visit of Dr. Abiy Ahmed last October to Italy and the visits of Italy’s President and Prime Minister to Ethiopia.

Commending the relationship between the two countries in trade and investment, Gedu called on his Italian counterpart to further deepen relations through investing more in various sectors.

The Minister also called on Luigi Di Maio to closely monitor the implementation of projects that are being undertaken through the Italian Development Cooperation in Ethiopia.

The Ethiopian Minister also thanked Italy for its support to Ethiopia’s Homegrown Economic Reform and invited Italian companies to exploit the opportunity.

Gedu has also briefed Luigi Di Maio about Ethiopia’s stances on the filling and operation of the Grand Ethiopian Renaissance Dam and the consultation that the Ethiopian Government is currently undertaking with stakeholders at home.

The Foreign Minister of Italy, Luigi Di Maio on his part noted the significance of Ethiopia’s socio-economic reform and expressed his country’s determination to support it.

He also assured Gedu that Italy would provide capacity building support for the upcoming General elections in Ethiopia.

During his stay, Gedu will also meet the heads of the International Fund for Agricultural Development (IFAD), World Food Programme (WFP), and the Food and Agriculture Organization (FAO) to consult on running projects in line with the objectives of Ethiopia’s ongoing economic reform.