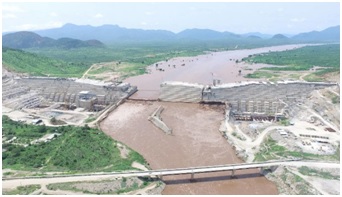 Ethiopia, Sudan and Egypt yesterday resumed their negotiations to resolve a years-long dispute over the filling and operation of the Grand Renaissance Dam.

Water and Irrigation ministers of the three countries took part in the negotiation which was held online amid the coronavirus pandemic.

Officials from the U.S. and the European Union were also in attendance.

The talks came a day after tens of thousands of Ethiopians flooded the streets of Addis Ababa, in a rally to celebrate the first stage of the filling of the Grand Ethiopian Renaissance Dam reservoir.

The negotiation will continue for the coming two weeks with a combination of trilateral ministerial meeting, expert working group meetings, and sessions with experts and observers.

Ethiopia has reaffirmed its fair and reasonable position on River Abay that the dam will generate power to millions of its citizens who are left out of access to electricity, help bring them out of poverty and also create regional economic integration in the region and beyond.