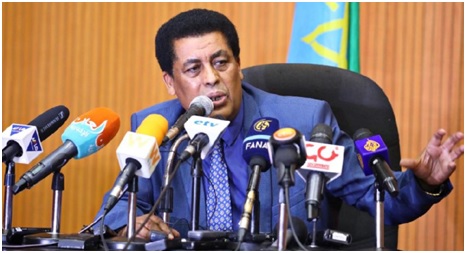 In a press briefing held today, Spokesperson of Ministry of Foreign Affairs, Ambassador Dina Mufti stated that Ethiopia urged that the negotiation on the Grand Ethiopian Renaissance Dam (GERD) shall continue under auspices of the African Union (AU).

Ambassador Dina also said that the humanitarian response has continued in Tigray region.

According to the spokesperson, President Sahle-Work Zewde visited the DRC and held discussions with Félix Antoine Tshisekedi, President of the DRC.

The two presidents discussed bilateral and regional issues particularly the diplomatic representation of Ethiopia in the DRC, he said adding that President Sahle-Work congratulated Félix Antoine Tshisekedi as in few days he will receive the chairmanship of the African Union to from South Africa.

He added that the president promised to bring him help, support and hospitality during her term at the head of the continental institution.

President Sahle-Work recommended to the DRC that the ongoing tripartite negation shall continue under the auspices of the African Union, he noted. The spokesperson has also extended gratitude to South Africa for properly treating the negotiation.

Ambassador Dina further unveiled that a three-day workshop regarding the Ethiopia-Sudan border issue was held in the presence of Demeke Mekonnen, Deputy Prime Minister and Foreign Minister of Ethiopia.

The meeting was concluded reaffirming Ethiopia’s commitment to resolve the issue peacefully through reactivating existing mechanisms for the re-demarcation process.