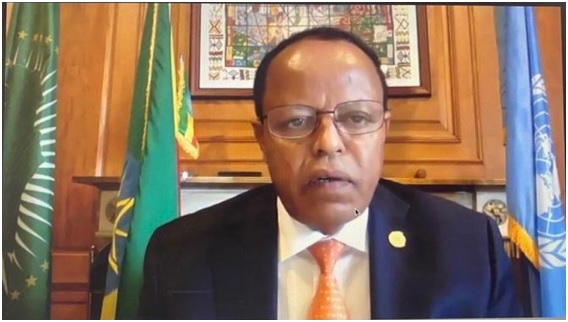 Ambassador and Permanent Representative of Ethiopia to the United Nations, Taye Atske Selassie has briefed the African Group of Ambassadors in New York on the situation in Tigray.

He thanked the Group for their solidarity and support underscoring Ethiopia’s resolve to come out stronger. Members of the Group relayed that Ethiopia will prevail as it had in the past.

Similarly, Alemayehu Tegenu, Ambassador Extraordinary and Plenipotentiary of Ethiopia to Russia met with the Director for Africa at the Ministry of Foreign Affairs of the Russian Federation, Tkachenko Vsevolod Igorevich yesterday.

During the meeting, the two sides discussed regional and bilateral issues of importance.

Ambassador Alemayehu briefed him on latest developments in the northern parts of Ethiopia in Tigray region and the Ethio-Sudan border, parliamentary election, as well as the status of the negotiation on the Grand Ethiopian Renaissance Dam (GERD).

Tkachenko on his part said that Russia will always support the peace and stability of Ethiopia and the whole region. The two agreed to work together in countering fake news and disinformation.

In a related development, Ambassador Extraordinary and Plenipotentiary of Ethiopia to Algeria, Nebiat Getachew, held talks with Mehinur OZDEMIR GOKTAS, Ambassador of Turkey to Algeria on bilateral and regional issues of mutual concern

During the talks Ambassador Nebiat briefed his Turkish counterpart on the current situation in Tigray, status of trilateral talks on GERD and Ethio-Sudan border dispute.

Moreover, he explained about the investment potentials available in Ethiopia and invited the Turkish investors to come and invest more in Ethiopia.