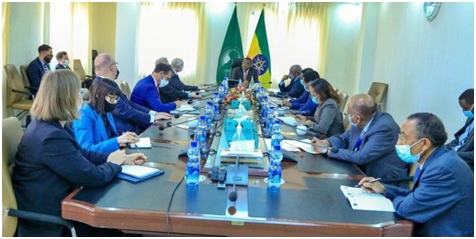 Deputy Prime Minister and Minister of Foreign Affairs, Demeke Mekonnen, received a high-level delegation led by the US Special Envoy to Sudan and South Sudan, Ambassador Donald Booth, at his office today.

He briefed the delegation on the tripartite negotiations of the Grand Ethiopian Renaissance Dam and other related issues.

He said although Ethiopia contributes 86% of the water share of the Nile River, 60% of its citizens still live in darkness and Ethiopia aims to change this once the construction of the dam is concluded.

Demeke affirmed that it is Ethiopia’s legal and sovereign right to use the Nile water for development fairly and equitably and that Ethiopia has no interest in harming the lower Nile Basin countries in doing so.

Recalling that the trilateral talks had been held to address concerns raised by Sudan and Egypt, he reiterated that Ethiopia has always been committed to resolving issues through negotiations.

He expressed Ethiopia’s interest in sustaining the African Union-led talks under the Chairmanship of the Democratic Republic of the Congo.

Demeke added that talks to change the modalities of the negotiations should be treated according to the provisions of the DOP, which was signed by the tripartite in 2015.

He also said that Sudan has been provided with information on the security of the dam and the filling of the dam is part of the overall construction project.

Demeke thanked friendly countries for their efforts to make the negotiations successful and maintain peaceful relationships among the countries in the region.

Discussions between the two sides ended based on mutual understanding, according to the Ministry of Foreign Affairs.